THERE were no half measures when it came to Platform 3’s celebrations after taking two prizes at the 2013 SLTN Awards.

Hewitt took an unusual route into the trade after training as a marine engineer.

“The week after we won [the SLTN Awards] the pub was rammed,” said Ian Gibson, who has owned the venue, on Linlithgow’s High Street, with wife Anne for the last 12 years.
He said the pub’s small-town location made success all the sweeter.
“The fact we got two of the top awards in a wee town is great,” he said.
The award wins were also particularly special for barman Iain Hewitt.
Now a director at Platform 3, Hewitt took an unusual route into the trade.
After training as a marine engineer, he joined the Merchant Navy and was based out of Newcastle.
On a visit home to see his family in Linlithgow, and undecided over his future career path, Hewitt admits his first steps into the licensed trade were driven by the need for a stop-gap job.
“It did start that way,” he said.
“I was thinking about maybe joining the fire brigade or the police.”
Five years later and Hewitt has gone from part-time worker to a director at Platform 3 after buying into the business last year, and he doesn’t expect to be leaving the trade any time soon.
“The plan is to make a career of it now,” said Hewitt.
When selecting Hewitt as SLTN Barperson of the Year, awards judges were impressed by the way he “quickly started making up for lost time” on entering the trade.
He has completed courses from the Wine and Spirit Education Trust (WSET) and the Scotch Whisky Experience (SWE) to boost his product knowledge, with the whisky training coming in particularly handy at Platform 3.
“We’ve got such a large range of whisky, it [the SWE course]was something that came up and myself and the two managers went through for it,” said Hewitt.
Around 50 whiskies line the Platform 3 gantry, ascending in price and rarity to the back shelf, which features whiskies from now closed distilleries. It’s a range which is popular with locals and tourists alike.
“We’ve done well over the years being nice to the barges,” said Gibson, referring to the tourist trade Platform 3 is able to pull in from the Union Canal.
With visitors from the canal, a strong whisky range and a group of local regulars, Platform 3 could likely tick boxes in a number of pub categories, but there is a community feel to the venue that even Gibson can’t quite put his finger on.
“There’s always that comment that no one can define a community pub but when you see it you know what it is,” he said.

When a customer walks into Platform 3 the first thing they might see is a model train riding backwards and forwards above the bar, in a nod to the station next door.
But beneath the toy train the furnishings get even quirkier, with a shelf packed with rubber ducks. It’s another unusual element of the pub’s interior design, but also a sign of the team’s involvement in the local community.
Each year the local Rotary Club, of which Ian Gibson is a member, hosts a rubber duck race to raise funds for groups in the local community. Over the past eight years the duck race is said to have raised £35,000.

No one can define a community pub but when you see it you know what it is.

For Platform 3, what started as a means of promoting the race, the odd rubber duck placed around the bar, has become a local tradition with regulars now returning from holidays around the world with ducks for the pub, which are then loaned out for race day.
“Customers started bringing ducks in so much that we had to build a second shelf,” said Gibson.
The growing number of ducks is typical of the way charity fundraising has taken off at the pub.
Locals are welcome to host quiz nights for a charity of their choice, around half of the proceeds from which end up in the pub’s local charity pot.
Groups that benefit from this pot include Linlithgow Link, a charity helping with locals’ transportation to hospital, The Stephen Gallagher Golf Foundation for young golfers and the town’s junior reed band.
Getting involved with local charities and hosting events for the community are two of the pub’s unique qualities, but Hewitt reckons there are simple steps publicans can take to build a community pub.
“Even little things like phoning people taxis, making people feel safe,” he said.
“People can seem to find it difficult but learning people’s names, good product knowledge and customer service, that’s the reason people come back.” 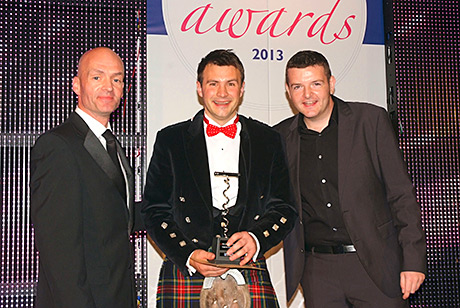