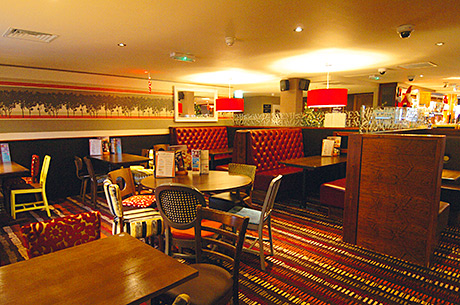 THE historic shipyards of Clydebank run through the veins of Greene King’s latest Scottish venture.

Keen to position its new venue as a community hub, the pub company brought Clydebank locals into the design process via a ‘name the pub’ competition.
The winning entry, ‘The Titan’, takes its name from the local landmark crane that once towered over John Brown’s shipyards.
The changes to the site run far deeper than just the name, however.
The building, which previously housed The Boulevard Hotel, received an extensive facelift in order to become the first Scottish member of Greene King’s Hungry Horse chain.
The pub company’s acquisition of the site, formerly home to a hotel, two restaurants and a nightclub, and subsequent 13-week refurbishment marked a complete change in direction for the venue, which is now positioned as a family-focused pub.
Working with local design firm Burns Interior Design and Glasgow-based building firm and shop fitter Hugh Stirling, the hotel and restaurant complex was transformed inside and out.
At a build cost of £950,000 the project was “not without it’s challenges”, according to Angus Alston, director at Hugh Stirling, whose firm carried out major structural works at the property.

The Titan’s artwork focuses on Clydebank’s shipping and railway heritage.

Inside, the project included the construction of a larger wood panelled bar area, a single expanded restaurant area and a function room space as well as the refurbishment of the existing hotel rooms and front reception.
In keeping with the house style of the Hungry Horse chain, The Titan’s interior is furnished with modern booths and tables, while imagery from the Clydebank area adds a local flavour.
Sourced from Salisbury-based firm Inn Gear, the artwork focuses on the town’s shipping and railway heritage and includes a feature wall dedicated to the history of the area.
Images of the original Titan can be found throughout the venue, from the artwork on the wall to a Meccano model of the giant crane.

The building received an extensive facelift to become the first Hungry Horse-branded outlet in Scotland.

Homage is also paid to the more famous ships built in Clydebank’s shipyards, with ocean liners such as the RMS Queen Mary and RMS Aquitania pictured on the walls and small model ships dotted around the venue.
The homely feel of The Titan is reinforced by the choice of seating, which combines a range of deliberately mismatched chairs around hardwood tables.
Ronnie Burns of Burns Interior Design, whose previous projects include The Kitchin in Edinburgh and Amore in Glasgow, said the Hungry Horse brief was a design template that “flexes”.
“You’re allowed to have your own take on it,” said Ronnie.
“It’s very rarely you’ll go into a Hungry Horse that looks the same [as others in the chain].”
External work to the venue, including a new frontage bearing the Hungry Horse logo, was designed by Burns, with work on the venue’s grounds carried out by landscaping firm Branching Out.

The Titan also now benefits from a revamped car park with improved lighting.
The change in focus for the venue also saw the conversion of the previous ground-floor nightclub into a function and conference space.
Catering for meetings, events and private parties, the space now includes new sound and lighting equipment.
On the food side, the Hungry Horse menu underlines the venue’s family focus.
Positioned by Greene King as a ‘value’ brand, Hungry Horse offers a range of different dining deals for each day of the week, with meals starting from £3.99.
Hotel guests and locals can choose from a broad selection of dishes encompassing traditional ‘pub grub’, steaks and Tex-Mex, as well as a range of American and Indian meals.
The Titan also offers a full children’s menu, with its own meal deals presented by Hungry Horse brand mascot Super Horse, a figure of whom welcomes guests at the entrance of the restaurant.
The opening of The Titan is said to have created an additional 25 local jobs while retaining the venue’s original team of 32 staff.
New appointments have included the recruitment of Glasgow-born general manager Laurna Jackson, who has lived in the Clydebank area for several years.
Although a considerable undertaking in itself, the opening of the new venue is part of a broader expansion drive on the part of Greene King.
In November, the firm opened Linwood Farm, a 300-cover pub in Renfrewshire and it has been reported that the company is aiming to open a further 90 pubs in the next 18 months as part of a drive that could push the firm’s estate to 1100 sites across the UK.
Currently totalling around 200 units, the Hungry Horse chain is expected to see a further 114 sites opened as part of the expansion, with The Titan one of 25 Hungry Horse venues expected to open in Greene King’s current financial year.