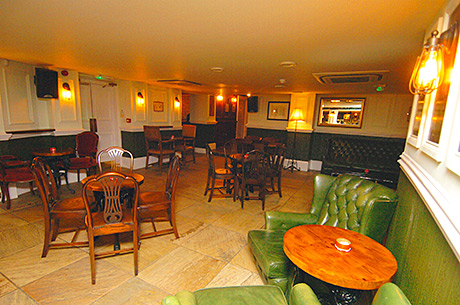 THIS could be a big year for Edinburgh bartender Iain McPherson.

The former general manager of award-winning cocktail bar and venue The Voodoo Rooms, Iain opened his own bar, Panda & Sons, in the capital late last year.
Based on a speakeasy theme with a twist, Panda & Sons is not just a new face on Edinburgh’s burgeoning bar scene; it’s also the beginning of a new chapter for Iain, who has never owned his own business before.
Having scouted a number of sites around Edinburgh, Iain settled on the Queen Street premises – an Iona Pub Partnership lease – and set about creating a new basement bar.
Funded by a private investor, the transformation of the space – which had been vacant for five years – was an extensive project, costing around £120,000 and taking three months.
The result is a high-concept bar that combines two key themes: a speakeasy and a vintage barbershop, tied together by the fictional Panda family.
The bar’s exterior takes the shape of a barbershop window, with a staircase leading down to the basement. The venue itself is ‘hidden’ behind a door resembling a bookcase at the bottom of the stairs.
Inside, the space is dressed with vintage furniture as well as barbershop paraphernalia.
“Everyone does prohibition-style speakeasies, but I wanted to have a vintage décor look, but with a quirky take on it,” Iain told SLTN.
“So we’ve got the barbershop on the outside, and the story is that Panda and sons are a family that run a barbershop and they’re also drinks enthusiasts.
“One of the characters, Panda, is paranoid that prohibition is going to hit Scotland, and so he’s made a speakeasy in advance, getting ready for the apocalypse.”
The Panda family is prevalent throughout the venue, appearing in artwork on the walls as well as featuring extensively on the drinks list.
“I just want to bring the love back into cocktails,” said Iain.
“It’s so good seeing so many bars doing such great cocktails now, but it’s getting a bit too serious. As much as I want serious thought being put into the cocktails, I want it to be in a more inviting and relaxed atmosphere.” 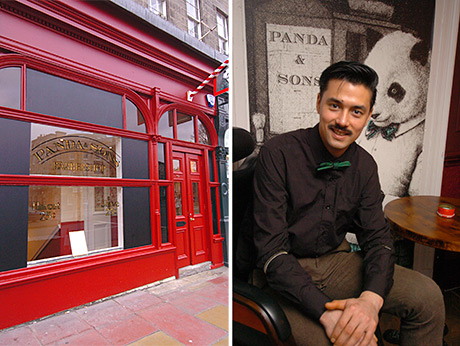 Despite his previous experience at The Voodoo Rooms – and guidance from his former bosses – Iain said taking the reins of his own company presented a unique set of challenges.
“There’s a lot more to it than you think,” he said.
“Even when I worked for Voodoo Rooms I was just doing routine paperwork – I wasn’t doing the accountancy side: tax returns, how much you’re due the government, how much payment is going out for wet goods – beer, wine. Even stuff like glassware.
“All these costs can rack up. Wet goods really add up.
“You think ‘oh I made some good money today’ and then you get a bill through.”
And the financial health of the company is not the only issue that weighs on the mind of a new business owner, said Iain.
“Suddenly you’ve got seven people that are dependent on you to pay their rent and so they can eat,” he said.
“So that’s another added stress – not only are you worried about your business, you’re worried about everyone else’s welfare, which didn’t really click until I was doing everyone’s wages. Some of them are your friends as well, and you think ‘man, I can’t let these people down.’”
It’s early days for Panda & Sons, but Iain is already thinking about his next step.
With support from Iona, he is considering opening further venues in the coming years.
“They’ve understood it’s not about getting a quick buck, it’s about building with good operators, said Iain.
“And hopefully I’ll become a good operator.
“Obviously I need to keep my feet on the ground and get this place working, but there’s a career route with Iona, which is quite exciting.”