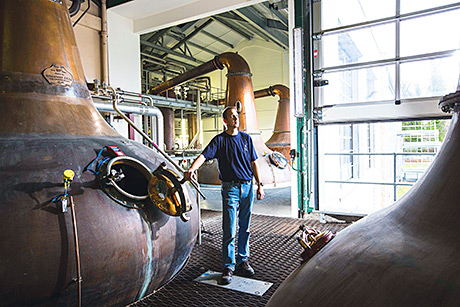 EDRINGTON Group has unveiled plans for a new distillery and visitor centre for Speyside single malt The Macallan.

The company, which also owns the Famous Grouse, Cutty Sark and Highland Park brands, said it plans to invest £100 million in the Macallan estate as it looks to meet growing demand for its products.
Subject to planning consent, work on the new building would begin in autumn 2014, with completion scheduled for spring 2017.
Edrington chief executive Ian Curle described the project as “a confident investment in the future of The Macallan and its home on Speyside”.
“Our plan for the estate includes a contemporary distillery that embodies the international style of The Macallan and builds on the brand’s tradition of quality and craftsmanship,” said Curle.
“As this long-term investment develops it will bring significant employment and economic benefit to the local community.”
The news came as Diageo, the company behind whisky brands such as Bell’s, Johnnie Walker and Talisker, completed major expansion work at two of its Speyside distilleries.
The projects, at the Linkwood and Mannochmore distilleries near Elgin, represent an investment of £14m and are said to have significantly increased production capacity at both sites. They are part of an ongoing, £1 billion investment in Diageo’s Scotch whisky business.
Six new washbacks and two new copper stills were installed at the Linkwood Distillery, increasing the facility’s annual production capacity by around 50%, while a new stillhouse, mashtun, two new copper stills and eight new washbacks at Mannochmore are said to have doubled capacity there.
The company’s investment project director, Mike Jappy, described the two facilities as “important distilleries for Diageo, producing high quality single malt whisky for our world-leading blended Scotch whisky portfolio”.
“Speyside is at the heart of Diageo’s distilling business and we look forward to progressing the next phase of our investment programme with further expansions in the next twelve months,” he added.
In addition to the expansions of Linkwood and Mannochmore, projects are also underway at two more of Diageo’s Speyside distilleries: Glendullan and Mortlach, both of which are located near Dufftown.