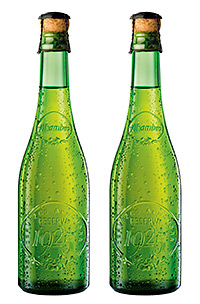 A LIMITED number of Champagne-corked bottles of Spanish craft beer Alhambra Reserva 1925 have been released in the UK in celebration of what is described as a “hugely successful year” for the brand.

Available from UK distributor Morgenrot, the 75cl bottles of the 6.4% ABV Reserva are said to be listed in a number of Spanish restaurants, hotels, style bars and gastro pubs.
Graham Archibald, national account director at Morgenrot, said the Reserva 1925 “epitomises the uniqueness and quality of the Alhambra brewery”.
“The beer has been Spain’s best kept secret for years but it is now gathering a cult following outside of Spanish restaurants as well,” said Archibald. “With the brewery only releasing a small amount of the Reserva, we don’t expect it to last long as interest is already through the roof but it is great to see the excitement for the brand.”