FROM the window tables in Twenty Princes Street – the new restaurant in the Royal British Hotel – diners are treated to a panorama of Edinburgh’s old town, from the Scotsman Hotel all the way to the castle.

But it wasn’t always this way.
In fact, until very recently, the space, which was previously used as a function room, was lying empty.
The hotel itself has been owned by Newcastle-based Cairn Group since 1991, but it was an agreement earlier this year between the firm and InterContinental Hotels Group, which will see the hotel operate under the Hotel Indigo brand from next year with Cairn retaining ownership, that proved to be the catalyst for the transformation of the building.
The first stage in a £5 million refurbishment project, Twenty Princes Street Grill and Smokehouse and adjacent bar Juniper cost around £2m to create.
As general manager Martin Scott told SLTN last week, the restaurant and bar were effectively created from a blank canvas.
“You’ve got to be bold when you’re totally making it up,” he said.
“It’s not like we took over an existing restaurant.”
Work on the new look, which was created by Newcastle-based NArchitecture in what Scott described as a “design as we go” fashion, got underway in July of this year, with Twenty Princes Street and Juniper both launched on August 8.
It was a big project by all accounts.

Edinburgh-based shopfitter Concept 9 had to redirect pipe work covering the original ceiling, which was behind a suspended Artex ceiling, and restore cornice work to its former glory.
The result is a design that strikes a balance between the old and new.
Triple-height bay windows and the ceiling detail suggest Victorian heritage, while illuminated curved booths and modern artwork give the restaurant some contemporary credentials.
“We tried to keep everything as unspoiled as possible,” said Scott.
“We want everyone to stare out the window.
“We had to be bold with what we were going to do.
“We had to make a distinct restaurant and get quite ambitious about the design.”
Like its interior, Twenty Princes Street’s menu had to be built from scratch.
Recruiting Tony Sarton, formerly of Tigerlily on George Street, as executive chef, Scott and the kitchen team set out to compose a menu that would attract customers to Princes Street.

The plan wasn’t necessarily to create a steak restaurant “but that’s what it’s become known for”, said Scott.
The end result may have something to do with the Josper grill, which sits at the heart of the kitchen and runs on around ten bags of coal a week.
The Spanish-made grill is said to reach temperatures in the region of 700 degrees and, according to Scott, cooks Twenty Princes Street’s Castle Mey beef, from Longoe Farm on the Pentland Firth, to perfection.

We had to make a distinct restaurant and get quite ambitious about the design.

A commitment to local produce is found across the menu at Twenty Princes Street, which uses Scottish shellfish all year round and local seasonal produce sourced by Sarton, who has been known to visit supplier farms.
Not content with having local produce delivered to the restaurant’s door, last month its entire staff embarked on a trip to the fishing village of Anstruther in Fife, chartered a boat and headed out to the North Sea to catch fish for a seafood event at the restaurant.
And the team plans to build on its commitment to local produce going forward.
“We’re going to do a game one in February,” added Scott.
“We’ll go out hunting and shoot and catch what we can.” 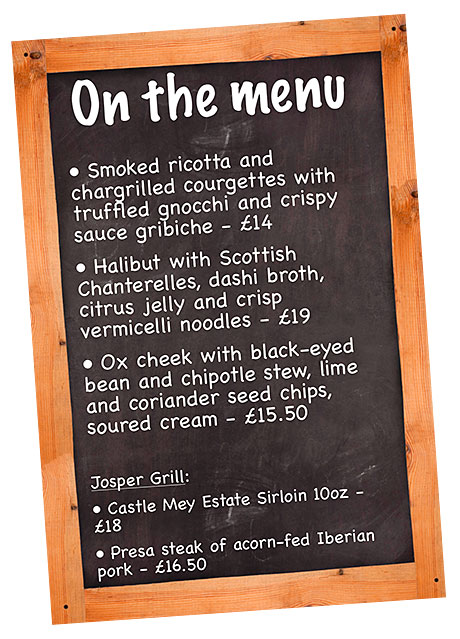