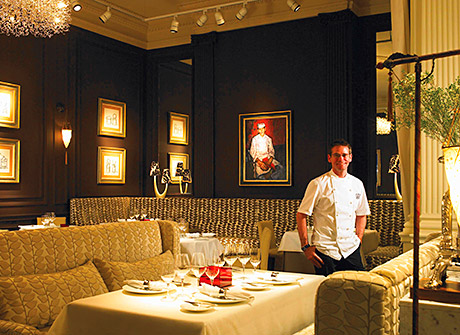 ANDREW Fairlie’s signature restaurant at Gleneagles has been named the best eatery in Scotland in the newly published Good Food Guide 2014.

The latest edition of the book, which is now owned by supermarket chain Waitrose, features a total of 104 Scottish restaurants, pubs and cafés, including 11 new entries.
Andrew Fairlie at Gleneagles was ranked at number 20 in the book’s top 50 UK restaurants listing, leapfrogging Leith restaurant The Kitchin, The Peat Inn near St Andrews and Edinburgh’s Restaurant Martin Wishart, all of which were ranked higher than Fairlie’s restaurant in last year’s guide.
The Kitchin retained its spot at number 21 in the 2014 guide’s top UK restaurants listing, with Restaurant Martin Wishart at number 26, the Peat Inn at 28 and Edinburgh restaurant Castle Terrace at number 46.
Fairlie, who holds two Michelin stars, told SLTN maintaining such high standards for more than a decade has been a challenge for the team.
“We’ve been in business for 13 years now, and there’s some great new restaurants springing up all the time,” he said.

Some restaurants can turn it on for one night; doing it every single night is the hard part.

“So for us still to be considered the best in Scotland after 13 years is credit to all the guys we work with.
“To keep that level of consistency for all that time is, as most restaurateurs would say, the hardest thing to do.
“I think for some restaurants it’s easy to turn it on for one night if they know somebody special is coming in, but to do it every single night – that’s the hardest part.
“I think that’s why the Good Food Guide and the Michelin Guide are the two most respected – because you have no idea at all [when you’re being assessed].”
Fairlie singled out Stephen Mclaughlin, head chef at Andrew Fairlie at Gleneagles, and restaurant manager Dale Dewsbury, who returned to the restaurant last year after two years away, for praise.
“Having Dale and Stevie back together again has had a big difference,” said Fairlie.
“I can definitely see it.”
There are eleven new Scottish listings in this year’s guide. Four of these are in Edinburgh – Purslane Restaurant, The Gardener’s Cottage and two Galvin family restaurants: Galvin Brasserie de Luxe and The Pompadour by Galvin, both in The Caledonian hotel; and there are two in Glasgow: the Cali Bruich and Central Market.
In Fife, Anstruther Fish Bar secured a listing in the guide, while the Limetree Restaurant in Moffat was also listed.
The Highlands is home to three of the new entries: The Cross in Kingussie, the Mountain Café in Aviemore and Birch Tree in Delny.
Meanwhile, Glasgow restaurant Ubiquitous Chip is the longest-serving Scottish eatery to feature in the guide, having been listed for 42 years.
Ostlers Close in Cupar, Airds Hotel in Port Appin and Inverlochy Castle in Fort William have all appeared in the guide for over 30 years.
And The Three Chimneys on the Isle of Skye, The Creel on Orkney, and Silver Darling in Aberdeen all have over 20 years tenure.
“Scotland seems to be a magnet for talented chefs,” said Elizabeth Carter, consultant editor of the Good Food Guide.

Scotland seems to be a magnet for talented chefs, and has a wealth of top restaurants.

“While the country has a wealth of top restaurants, particular acknowledgement must go to the new entries in Waitrose Good Food Guide 2014. It’s great to see more and more simple, good-value restaurants entering the guide.
“I really am impressed by the high standard of all our Scottish restaurants.
“Long may this continue.”
The Good Food Guide is now in its 63rd year and features reviews of restaurants, pubs and cafés from across the UK.
South of the border, chef Simon Rogan’s L’Enclume restaurant in Cumbria was named the UK’s best, taking the number one spot in the Good Food Guide’s top 50 list.
Heston Blumenthal’s The Fat Duck took second place on the list. Both restaurants achieved a perfect score of ten out of ten for the quality of their cooking.
“Rogan rightfully takes his place as leader of the pack when it comes to modern British cooking,” said Carter.
“His fantastic way with seasonal ingredients from the Cumbrian land and coast brings dishes that are a joyful celebration of this county’s magnificent diversity.
“L’Enclume is truly deserving of the number one spot.”

Image – Andrew Fairlie at Gleneagles has taken the top Scottish place in the Good Food Guide’s 2014 edition. The restaurant has been open for more than 13 years.