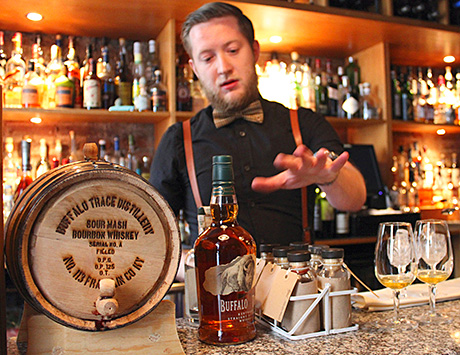 AN Edinburgh bartender has been named ‘Scotland’s Barrel-Ageing Master’ after winning a cocktail competition for bourbon brand Buffalo Trace.

Kyle Jamieson of the Bon Vivant competed against seven other bartenders to take the top prize at the competition, which required competitors to create a cocktail aged in a Buffalo Trace barrel and using Buffalo Trace Bourbon and Buffalo Trace White Dog.
Kyle’s cocktail, the Kentucky Reviver #113, was aged for 113 hours in a Malbec-conditioned cask and used the two spirits, spiced with orange zest, Cocchi Americano and lactic acid.
For taking first place Kyle won a trip to the Buffalo Trace distillery in Kentucky.
The eight bartenders will now compete with each other to see who can sell the most of each cocktail to the public.