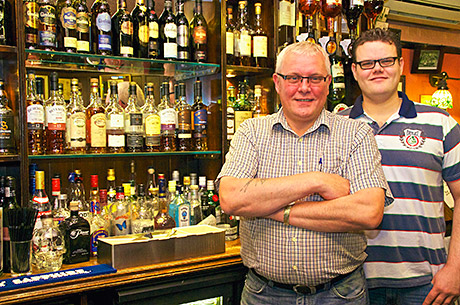 GLASGOW’S Bon Accord has been named UK Whisky Bar of the Year by the Good Pub Guide 2014.

The pub was the only Scottish venue to win one of 15 national awards, which included Beer Pub of the Year, Country Pub of the Year and Inn of the Year.
The guide, now entering its 28th year, also named a Dining Pub of the Year for each county, with the Plockton Hotel in Ross-shire taking the award for Scotland for the third time.
Bon Accord owner Paul McDonagh said winning the UK whisky bar award is a step up for the venue, which was previously listed in the guide.
“It feels great,” he told SLTN.
“The staff knowledge is great, they’ve worked very hard to get to that level. We do very well with tourists, this will help maintain things.
“There’s an amazing amount of people use that book.”
Success for the Bon Accord has come at a price, however, in the form of a significant and ongoing investment in whisky.
The bar’s latest big ticket purchase, the Glenlivet 70 Year Old 1940, was purchased from malt whisky specialist Gordon and MacPhail and was said to have cost £12,000.
Alan Pearson of the Plockton Hotel, which won the Dining Pub of the Year award for Scotland for the third time, also said recognition from the Good Pub Guide was helpful for a tourism-driven business.
“[The] Good Pub Guide is a good thing because it’s based on customer reviews,” said Pearson. “It’s one of the best publications for us.”
Pearson highlighted a commitment to local produce, coupled with a good atmosphere as key to the hotel’s success.
Fiona Stapley, joint editor of the Good Pub Guide 2014, described the guide as a “bible for pub-goers”.
“We have thousands of loyal readers who report to us all the time,” she said.
“They keep us in tune with how a pub is doing and we take their comments into serious consideration when choosing an award-winning pub.”

Image – Father and son team Paul and Thomas McDonagh of the Bon Accord.