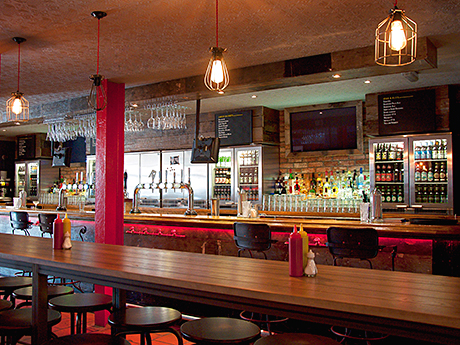 AT first glance, it’s perhaps not their usual style.

Yes, there’s a robust range of premium spirits and cocktails, which were created by some of Scotland’s best-known bartenders, including Andy Gemmell, Mal Spence and Ervin Trykowski.
But there’s no vast gantry of bottles jostling for space – a hallmark of Kained Holdings’ Finnieston and two Lebowskis outlets.
Instead, most of the bar at the group’s latest venture – the LUAC on Great Western Road – has been given over to craft beer. There are also TV screens dotted around the outlet showing sport – another element which doesn’t feature in the other venues.
As managing director Graham Suttle told SLTN, the LUAC, which opened its doors in the former Wise Monkey outlet late last month, was inspired by a sports bar in Louisville; he and fellow directors Scott Arnot and Maurice Clark also reckoned the more ‘relaxed’ offer was a better fit with the local young professional and student clientele.
But while the trio was keen to divert from the spirits and cocktail-led offer which is the mainstay of the other venues, the operators wanted to ensure the LUAC maintained some links with its sister outlets.
The name LUAC (Little Urban Achievers’ Club), for a start, is taken from the film The Big Lebowski, which inspired the name of Kained Holdings’ outlets in Glasgow and Edinburgh.
There are further subtle references to the LUAC’s sister bars inside the new outlet, including light shades made from glass milk bottles – a nod to the White Russian cocktail favoured by the protagonist in the film.
Quirky lighting is, however, just one part of the entirely new design scheme, which Graham worked on with Rough Design and landlord Spirit Pub Company.
A four-week, £300,000 joint project between Kained Holdings and Spirit saw the interior stripped out and rebuilt.
Large boxed pillars were removed to open up the floor space and allow more natural light into the venue, while glass doors and a new window were installed at the rear of the outlet to bring in yet more light.
Different styles of seating have been used to ‘split’ the outlet into distinct areas.
Brown fixed leather seating, dark wood tables and reclaimed chairs have been used in the raised seating area at the front of the premises, which also features exposed brick walls and reclaimed school floorboards, while the space at the rear of the venue is geared towards diners and groups of people watching sport; it’s been kitted out with long communal tables, each with its own TV screen, and booth seating.
The middle section of the outlet is dominated by the bar, where accent lighting has been used to highlight the back-bar counter-top fridges – home to the LUAC’s 50-strong range of bottled beers – and fonts.
Graham said the LUAC combines a “serious offer with an easy-going interior”.
“We wanted a spin-off of Lebowskis and I think that’s what we’ve got,” he said.
“It’s not Lebowskis, where we’ve got 400 [spirits] bottles and two cocktail stations; here it’s all about fonts, fridges and frozen pint glasses.
“It’s refreshing. I feel this place has a serious offer in a more light-hearted venue.” 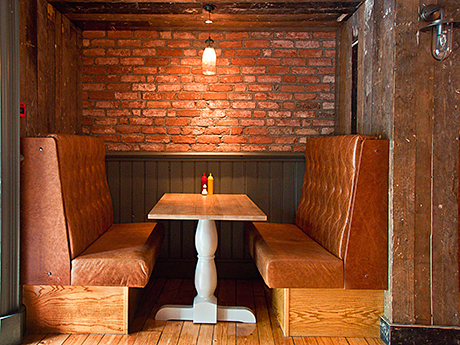 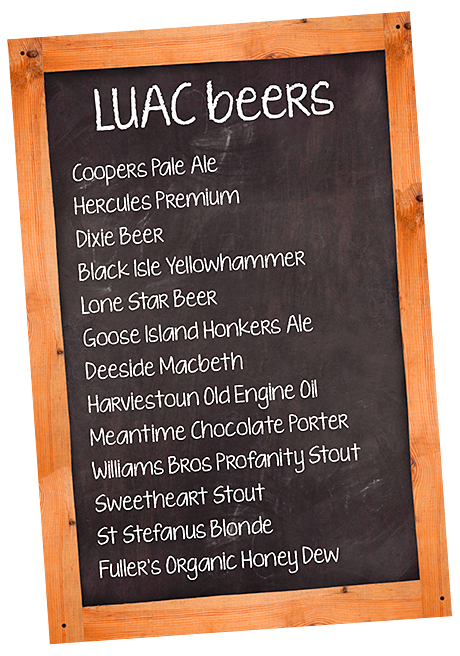 Images – Accent lighting has been used to highlight the range of beers in the counter-top fridges and on tap. Different styles of seating have been used throughout the venue.