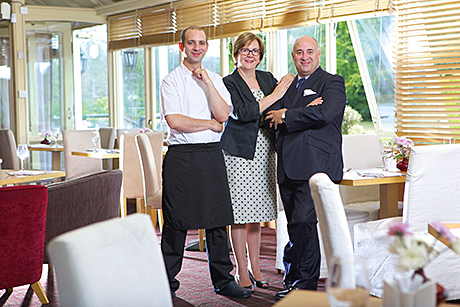 A HUSBAND and wife team in East Lothian are aiming to breathe new life into their hotel brasserie after the appointment of their son as head chef.

Pauline and Nico de Freitas, who have owned the Maitlandfield House Hotel in Haddington since 1999, have tasked son Mark with heading up the kitchen.
Mark’s career has included a stint working in Kenya, at the Mara Gypsy Luxury Safari Camp, as well as the Carlton Hotel in Edinburgh, Cringletie House in Peebles and, latterly, the Lake of Menteith Hotel in Perthshire, where he earned two AA Rosettes.
“I have been fortunate to work with a number of very skilled and talented head chefs, including Willie Deans, Michael Hobbins and Graham Campbell, who have prepared me perfectly for the role I am now taking on in our family business,” said Mark.
“The time now seems right and the opportunities are there for us to take the food offering at the Maitlandfield to a new level, delivering simply inspired, hand crafted dishes with a modern approach.”
The new menu at the hotel has a focus on locally-sourced ingredients, and includes dishes such as Slow Braised Lothian Hill Lamb, Pan Seared Stone Bass Fillet and East Lothian Summer Risotto.
“East Lothian is blessed with a tremendous natural larder of fish, seafood, meat, fruit, vegetables and dairy produce,” said Mark.
“At the Maitlandfield, we will be making full use of this larder and I am very excited by what we can do here to drive home the ‘eat well, eat local’ message.”
The 17th century hotel is located 16 miles outside of Edinburgh.
Facilities include 25 bedrooms as well as a conference suite and banqueting hall that can accommodate 200 guests.
The family is also planning further investment in the hotel’s public areas and bedrooms.