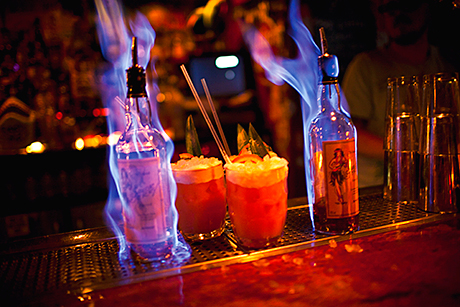 VODKA and non-cream liqueurs continue to dominate spirits sales in the UK on-trade, despite huge strides from categories such as rum and tequila, a new report from First Drinks has claimed.

The William Grant-owned distributor’s 2013 Market Report said the value of spirits sold in the UK’s pubs and clubs topped £4 billion in the year to April 2013, an increase of 6% on the previous year, with hotels and restaurants up 16% to £1bn. Overall, on-trade spirits sales were up 8% to £5bn.
Premium spirits were said to be driving the growth, with sales up 29% to £475 million.
Smirnoff is cited as the most valuable spirit brand in the UK on-trade in the report, followed by Jack Daniel’s, Jagermeister, Gordon’s and then Bacardi, while vodka remains the biggest spirits category (with 31% of on-trade value), followed by non-cream liqueurs (12%), blended Scotch (8%) and speciality spirits (9%).
However, flavoured and spiced rum, tequila and golden rum all saw significant growth during the twelve month period, with sales up 42%, 33% and 43% in value terms respectively.
Restaurants represent the biggest growth area for on-trade spirits sales, followed by cafe bars, hotels and branded food pubs.
“As the recession continues to play out, it is important to have an in-depth understanding of consumers, their changing habits and how they are adapting,” said First Drinks managing director Chris Mason.
“As such, premium suppliers like ourselves need to work hand in hand with on and off-trade retailers to ensure we are delivering tailor-made, creative solutions to satisfy consumers.”