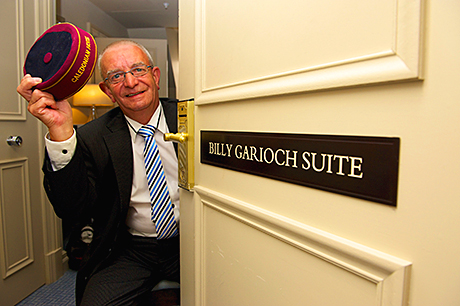 MANAGEMENT at The Caledonian Hotel on Edinburgh’s Princes Street have renamed a suite in honour of former concierge Billy Garioch.

The fifth floor Billy Garioch Suite is so-called in recognition of Billy’s 50 years of service at the hotel, which is now part of the Waldorf Astoria portfolio.
Billy joined the hotel at the age of 15 when it was trading as the Princes Street Railway Station Hotel. Initially planning to start an apprenticeship when he turned 16, he instead remained at the hotel, which he described as “the epitome of luxury”.
Dale MacPhee, GM of the five-star hotel, said Billy had become “one of the most memorable parts of the hotel”.
“Many of our guests have told us how much they will miss his welcome on arrival,” said MacPhee. “We’re delighted to be able to rename one of our suites in recognition of his loyal service and to ensure that his association with The Caley continues.”