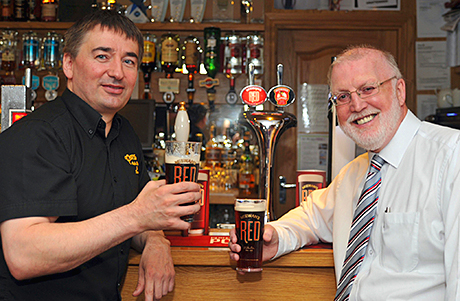 THE firm behind McEwan’s claims its newest ale has taken Scotland by storm.

Wells & Young’s said it is “delighted” with the on-trade performance of 3.6% ABV McEwan’s Red, which it launched in May.
“We have gained listings in outlets nationwide and McEwan’s Red is appealing to a new, younger audience,” said Ian Risby, McEwan’s sales manager for Scotland.
“The response from all our customers has been extremely positive.”
The ale’s performance in Fraserburgh outlet Cheers Cafe Bar has been highlighted as an example of its success. “We sold our first keg in three days and we’ve never had a beer that people have gone for at this pace,” said Cheers owner Dennis Forsyth.
Ken McDade, regional sales executive for McEwan’s, said Cheers offered “the best opportunity to encourage trial” of the new ale.