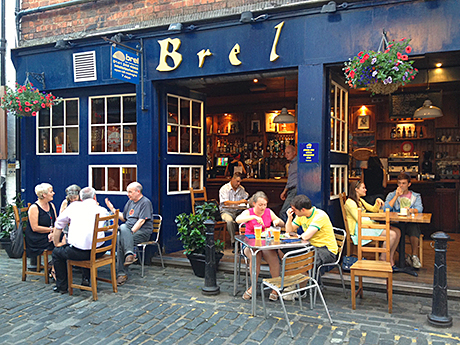 Oli Norman, who founded PR firm Dada and voucher discount service Itison.com, and business partner Stephen White bought the freehold of the Ashton Lane bar from Baby Grand Group in a seven-figure deal.
Work is now underway on a £300,000 three-phase revamp, the first stage of which is due to be completed in around three weeks.
The bar’s name, which was inspired by Belgian singer Jacques Brel to tie in with its focus on Belgian beer and food, will be retained and paired with a new logo.
Inside, the bar will be freshened up, and the kitchen, conservatory and beer garden will also be revamped.
In terms of the offer, Norman told SLTN the focus on beer will remain, with an “interesting mix” of draught and bottled products, while the menu will feature dishes like langoustine frites and baked Camembert for sharing.
Norman and White also plan to introduce a programme of events similar to that at Sloans in the Argyll Arcade, which stages Eatfilm meal and movie nights and the Scottish Macaroni Appreciation Club (SMAC), billed as a ‘night of gourmet macaroni cheese’.
“The most important thing is we’re trying to ensure it [Brel] stays an independent place,” Norman told SLTN.
“I’ve always liked the bar – it’s a great unit.
“This is about keeping all of that, sprucing it up and having fun with it; that’s what it’s all about.”
As for adding any further bars to the estate, Norman said he’s content with two, describing his and White’s acquisition of Brel as “very opportunistic”.
“I literally live round the corner [from Brel],” he said.
“I’ve got no desire to own a groups of bars – it’s probably quite selfish but Sloans is 100 yards from my office and Brel is 100 yards from my house; I’m quite lazy!”

Image – Brel on Glasgow’s Ashton Lane is undergoing a phased £300,000 revamp; the bar will continue to focus on beer.