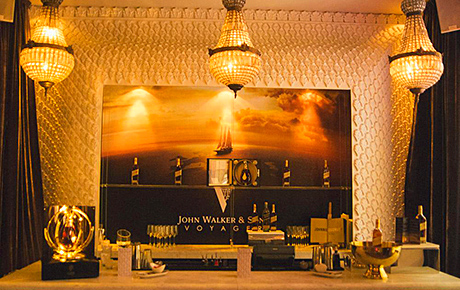 JOHNNIE Walker is enjoying a stop-over in Glasgow as part of its Voyager marketing activity.

Parent company Diageo has taken over the Boutique Bar at the city’s Corinthian Club to showcase its ‘super-premium’ Johnnie Walker Odyssey blend.
To mark the launch of the Scotch and the Voyager campaign, which has seen a 1920s-style yacht dock at some of Europe’s best known ports during a three-month voyage which will end in Leith next month, a special Johnnie Walker tasting event was held at the Corinthian Club.
Hosted by whisky writer Charles MacLean, the tasting coincided with the launch of Corinthian’s new Whisky Club; the venue is also promoting Johnnie Walker-inspired cocktails and food, including a special Whisky Experience private dining menu, throughout the summer.

Image – Odyssey will be showcased at Corinthian Club throughout August.