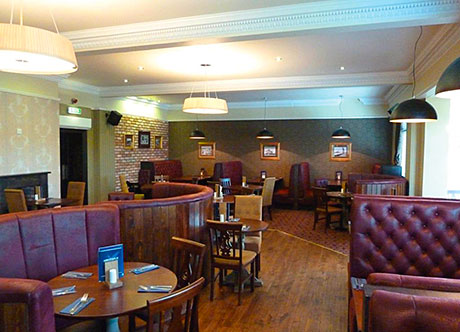 The Punch Taverns-owned outlet, which was previously called the Mahratta, opened on July 21 following a £300,000 root and branch refurbishment which took in the public bar, restaurant and function room.
Licensee Gary Horne, who runs fellow Punch outlet The Coppertop in nearby Falkirk, said elements of the new-look bar were inspired by the town, where Spitfire pilots were based during the Second World War.
“It was important that the pub kept its local identity within the community, hence the tie in of the old air strip and Spitfire branding,” he said.
“I felt it was important that, following the recent unveiling of the replica Spitfire in Grangemouth, the historic airfield was given the recognition it deserved and subsequently the name was changed to Abbotsinch.”
Punch Taverns’ partnership development manager Grainne Hayes said: “We’re delighted to invest in sites such as this.”

Image – The Abbotsinch in Grangemouth reopened on July 21 following a refurb.