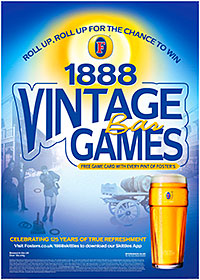 POPULAR 19th century Australian pastimes are at the heart of a new summer campaign celebrating the 125th anniversary of lager brand Foster’s.

An on-trade scratch card promotion, running in 5000 pubs across the UK, gives consumers the opportunity to win a range of prizes, including playing cards, poker dice and a vintage games book.
The new campaign is said to be designed to help licensees increase consumer footfall as well as the length of time people spend in the pub.
It is being supported by a range of point of sale material, including posters, tent cards and bar runners.
A Foster’s 1888 vintage skittles app is available for download from the brand’s website.
Gayle Harrison, brand director for Foster’s at parent company Heineken, said the campaign aims to “engage drinkers” in outlets and provide licensees with an “excellent platform to boost sales” by highlighting the heritage of Foster’s lager in its anniversary year.
The summer campaign comes as Foster’s prepares to sponsor the Edinburgh Comedy Awards for the fourth time, having first entered a partnership with the Fringe event in 2010.
The brand’s comedy sponsorship programme also includes the British Comedy Awards as well as programming on Channel 4.
Harrison said comedy sponsorships lie at “the heart of Foster’s brand strategy” and that the Edinburgh Comedy Awards would provide a “solid and lasting foundation for our marketing ambitions”.

Image – Consumers can win a range of prizes.