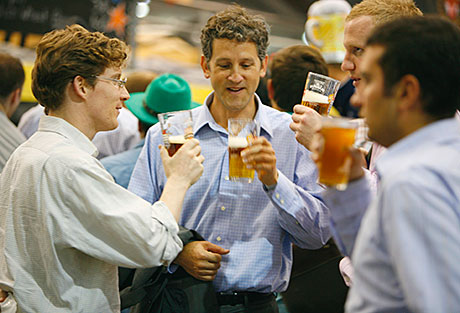 ARGYLL brewer Fyne Ales is celebrating after one of its beers took the top prize at a recent real ale festival.

The brewery’s Jarl, a 3.8% ABV ale, was named Champion Beer of Scotland at the recent Scottish Real Ale Festival in Edinburgh.
It is the first time in seven years that a brewery from the Scottish mainland has picked up the top award at the event.
The ale came top in a field of 159 beers from 48 Scottish breweries to be crowned this year’s champion.
Fyne Ales owner Tuggy Delap said she was “very proud of a great team who have put in a fabulous effort”.
Cairngorm Brewing Company’s Black Gold was named runner-up, with Highland Brewing Company’s St Magnus Ale taking third place.
Organised by the Campaign for Real Ale (CAMRA), the 11th annual festival ran from Thursday July 11 until Sunday July 14 at the Edinburgh Corn Exchange.
The four-day event attracted 3800 people – 300 more than last year – with visitors including brewers, publicans and the general public.
More than a hundred new CAMRA memberships were gained over the four days.
The festival was also said to have attracted visitors from the European Beer Bloggers conference, which was taking place in Edinburgh at the same time; it was attended by bloggers from around Europe with a number of brewers including Brewdog, Pilsner Urquell and Brooklyn hosting sessions.
Owen Bell, festival organiser for CAMRA, described the overall demographic at the Scottish Real Ale Festival as “very mixed”.
“When I started volunteering at the festival in 2008, the mix was about 80% male with an average age in the mid forties,” he said.
“This year it was around 60% with an average age in the mid thirties.
“We see a lot more groups of both men and women in their twenties prompted by our increased presence on social media and the raised profile of quality beer as a whole.”
Bell said next year’s Scottish Real Ale Festival is “pencilled in” to take place at the Corn Exchange in July again; and organisers are planning to expand the event further.
“We’ll be continuing to increase the number of breweries we showcase at the event and exploring more of the exciting beer that all Scotland’s producers new and old have to offer,” added Bell.