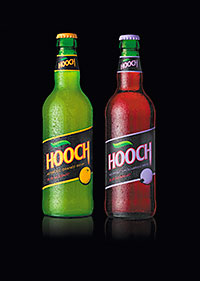 TWO new fruit flavours have been added to the Hooch range of RTDs – a year after the ‘retro’ brand was revived.

Hooch Orange and Blackcurrant have joined the Alcoholic Lemon Brew variant, which was first launched in the UK in 1994 and reintroduced by Global Brands last July following a ten-year absence.
The two new 4% ABV variants were chosen by Hooch fans via a social media campaign, which asked consumers to vote on the flavours they would most like to see revived.
As with the original lemon flavour, Hooch Orange and Hooch Blackcurrant are available in 500ml bottles and designed to be served over ice in a pint glass. The launch will be backed with marketing activity, POS material and staff training.
Simon Green, marketing director at Global Brands, said consumer response to Hooch since the brand was reintroduced has been “unprecedented”.
“The over 35s who remember Hooch from the first time around have welcomed the brand back, but we’ve also seen Hooch Lemon have incredible appeal amongst a new generation of drinkers who recognise the 500ml ‘over ice’ serve and favour a refreshing, fruity taste profile,” he said.
“Flavours are driving interest across the drinks categories, from cider to beer, and by bringing back the public’s preferred flavours we will broaden the overall appeal and awareness of Hooch whilst investing in RTDs, a category in which we lead the market.”