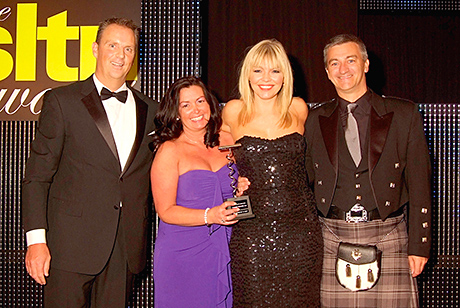 THEY might not live in the area any longer but it has done little to diminish Iain and Katie McLaren’s passion for Tollcross.

In fact the husband and wife team behind the Kimberley Tavern are perhaps more entrenched in the community now than when they did call the area ‘home’.
It’s their enthusiasm and support for the local area, its people and facilities that helped the Kimberley Tavern pick up SLTN’s Community Bar of the Year Award for 2012, in association with McEwan’s.
And, as the couple told SLTN last week, the pub continues to operate as a community hub for the people of east Glasgow.
Establishing the Kimberley Tavern at the heart of the community was part of the plan from the outset, according to the McLarens, who will mark their third anniversary at the pub – a Star Pubs & Bars leasehold – this October.
“We used to live locally,” Katie told SLTN.
“We moved away but we always had a fondness for the place. We were always going to do this.”
Fundraisers for local charities feature heavily in what is a packed programme of events at the Kimberley Tavern.
Regular events include the annual Michael O’Donnell Fund Gala Day, held in memory of the local schoolboy who was killed in a car collision in 2002. The Kimberley Tavern lends its support to the event, which takes place in Fullarton Park, with locals then heading to the pub once the gala day is finished.
The Kimberley Tavern also backs a host of other events in aid of local charities, with a sponsored zipline at Xscape to raise funds for the Donna Miller Foundation, which supports Yorkhill children’s hospital, scheduled to take place in September.

You can’t just open the doors and the community will come to your pub.

“We find ourselves getting involved with local charities,” said Iain.
“Bigger charities have more opportunity to fundraise so it’s good to support the local ones.”
The Kimberley Tavern’s involvement in the local community extends beyond charity events, however.
Local tradespeople, who are pub customers, are the McLarens’ first port of call for any maintenance work, while the majority of the pub’s staff are from the east end.
“It goes down well in the community – local people working in the place,” said Iain.
“It’s giving people the opportunity to do things. We’re keen to develop them.”
As well as supporting local charities and people, the McLarens strive to “give something back” to the community, staging two or three special events each year at the pub which they don’t charge for.
“People appreciate it,” said Iain, who highlighted tribute act Them Beatles as a recent example.
“It’s nice to give something back.”
“To be honest it’s a community pub and it’s about being the centre of the community.
“If anybody is doing something they’ll come to us.”
It’s an approach that Iain reckons can bring benefits for the trade as a whole, particularly in the current economic climate.
“It’s difficult just now; the trade is definitely depressed just now,” he added.
“Either you bury your head in the sand, or you do something about it.
“The licensed trade can get a bad name but I don’t think people realise what local pubs can do for the community.
“If you’re going to be in a pub in this kind of area, residential areas, then you need to be doing something.
“Don’t just call yourself a community pub, go and get involved in the community.
“People think they open the doors and the community will come to them but you need to go to the community.”

We moved away from the area but we always had a fondness for the place.

As for the McLarens, such is their enthusiasm for the local community that they’ve taken on The Strathspey across the road from the Kimberley Tavern on a leasehold with Star Pubs & Bars. And they are on the lookout for a third outlet.
“We’re actively looking for a pub,” added Katie. “It needs to be the right pub though.”
As long as there’s a thriving community on its doorstep it seems it will tick all the boxes for the McLarens.

Image – Iain (right) and Katie McLaren pick up the SLTN Community Pub of the Year Award for 2012.