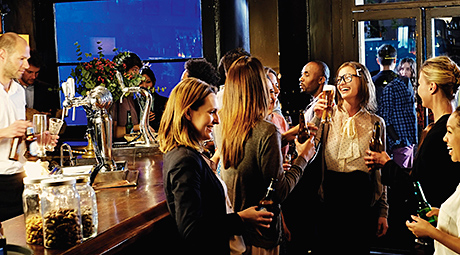 FIVE of the world’s biggest brewers have joined forces to launch a major new advertising campaign designed to bring consumers back to the beer category.

SAB Miller, Carlsberg, AB InBev, Heineken and Molson Coors are behind the ‘Let There Be Beer’ campaign, which invites consumers to “rediscover what’s great about beer”.
As part of the three-year initiative, a TV ad has been launched, which debuted during the British & Irish Lions rugby match on Sky Sports on June 29 and is set to run until the end of the year.
No brand logos from any of the five brewers feature in the ad, which instead focuses on three individuals as they enjoy a generic non-branded beer.
To coincide with the launch of the TV commercial, the Let There Be Beer logo was projected onto a number of UK landmarks, including Edinburgh Castle, London’s Tate Modern, the University of Manchester, Hadrian’s Wall, Cardiff Castle, Liverpool’s Queensway tunnel and the white cliffs of Dover.
In addition to the TV ad, a tie-in with Channel 4’s Sunday Brunch show is planned and further support is expected from a number of celebrities later in the year.
The campaign will also include social media activity, and a dedicated website is due to launch in the coming weeks.
Simon Cox, of Let There Be Beer, said: “There is an ever more diverse selection of beers available in our pubs and supermarket shelves.
“We’ve seen the emergence of a more discerning beer drinker, a growth in microbreweries, as well as increased availability of beer brands from all around the UK and the world.
“Two decades ago there were around 2000 brands of beer on sale in the UK compared to more than 5000 on sale today.
“Let There Be Beer is about instilling a passion for beer in the nation’s hearts and reminding the nation why beer is the nation’s best-loved drink. But for many, beer simply means pints of warm, flat lager.
“That couldn’t be further from reality.”
Inge Plochaet, president of AB InBev UK & Ireland, said the brewers behind the campaign “cannot watch this amazing category decline year-on-year any longer”.
“The UK is an important market and we want to work together to make people fall in love with beer again,” said Plochaet.
“We are all adamant that this is a long-term, multi-year campaign.
“We want to create a positive image of beer. We want it to be a drink people see as young, dynamic, vibrant and relevant. That is the primary indicator of success.”
The campaign has already garnered support from the British Beer & Pub Association (BBPA), CAMRA (Campaign for Real Ale) and the Society of Independent Brewers (SIBA).

Image – The new TV ad is stage one in a three-year campaign to promote beer.