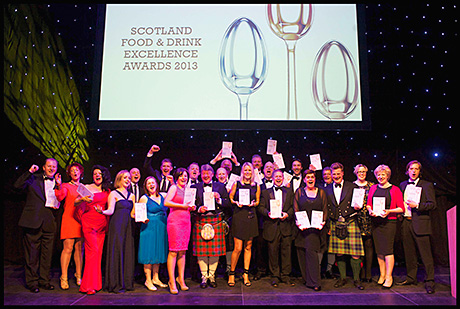 FIFTEEN producers and suppliers have been honoured at this year’s Scotland Food & Drink Excellence Awards in Edinburgh.

It was a particularly special night for food and drink firms in the north east, with Aberdeenshire companies topping five categories at the event.
Aberdeen-based Plenta Foods, the firm behind gluten-free food supplier Pulsetta, claimed both the Healthy Eating and Profiting Through Research awards, while The Store in Ellon took the award for Food & Drink Tourism; the Smokehouse in Methlick took the spoils in the Fish & Seafood category; and Dean’s of Huntly topped the bakery category with its Mary Steele speciality biscuits.
The award for Business of the Year went to St James Smokehouse in Dumfries & Galloway, which was also named Export Business of the Year.
The Highland Chocolatier also scored a double win in this year’s awards, topping the confectionary and snacking category and taking the Product of the Year award for its velvet truffles and spiced pralines.
Other winners included Rannoch Smokery, Taste of Arran and the Orkney Brewery, which took the top award in the drinks category with its Dark Island Reserve beer.
James Withers, chief executive of Scotland Food and Drink, said each of the finalists demonstrated “skill, innovation and premium quality”.
“Our food and drink industry is vital to the economy, generating significant employment and growing at an unprecedented rate,” he said.
“The work of Scotland Food & Drink is a partnership of industry bodies and government, supported by over 300 companies across Scotland. This is spearheading the industry’s growth and the awards highlight just some of the success stories doing the industry and country proud.”