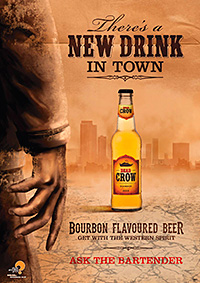 THE emerging ‘spirit beer’ category will have a positive impact on bourbon and American whiskey, according to the firm behind one of the newest players on the market.

Mark Hopper, head of innovation and development at SHS Drinks, which launched bourbon-flavoured beer Dead Crow earlier this year, said the beers will help attract new and younger consumers to American whiskey.
“When we do research groups generally, bourbon, and specifically Jack Daniel’s, is a brand they want to be associated with and aspire to, but they don’t always drink,” said Hopper.
“The potential here is that we could be broadening the consumer base for bourbon by introducing new consumers to it.
“It [bourbon] is quite a mature-tasting product, and that 18-25 year old consumer aspires to that and the associations of it, but I think their palates are perhaps not quite ready for it.”
SHS launched Dead Crow and sister product Cuvana – a rum-flavoured beer – with young adult drinkers aged between 18 and 25 squarely in their sights.
“We tested a number of different liquids in consumer research groups and the two spirits that were spontaneously requested in terms of being mixed with beer were bourbon and rum,” said Hopper.
“I think that’s a lot to do with the imagery and associations of bourbon.
“It’s clearly appealing to the target audience we pitched at.”
The company is distributing promotional packs to around 2000 outlets across the UK as it aims to raise awareness of the brands, which are being distributed nationally by Matthew Clark and Molson Coors and through wholesalers such as Inverarity Morton and Wallaces Express.
As well as posters, the kits contain bar runners, table talkers and bottle cut-outs.
Sampling activity in outlets will be accompanied by promotional items such as T-shirts, keyrings and bottle openers.
Hopper said merchandising is a key tool for boosting sales in outlets.
“If you are stocking a range of spirit beers then group them together, demonstrating a category, almost,” he said.
“Then it’s around awareness, and then trial. Those three things are pretty tried and tested as an approach.”
And it seems to be a category worth investing in.
Quoting figures from CGA, Hopper said spirit beers are currently worth £2.8 million in the Scottish on-trade, having grown by 34% in the past year.
And he reckons this growth will have a positive impact on the wider bourbon category.
“I think they are an access point to it, because I think that 18-24 year old wants to buy into it [whiskey], and buys into the brand imagery, but are not always actual consumers of it,” he added.
“So I think these absolutely have a role to play as part of that category.”