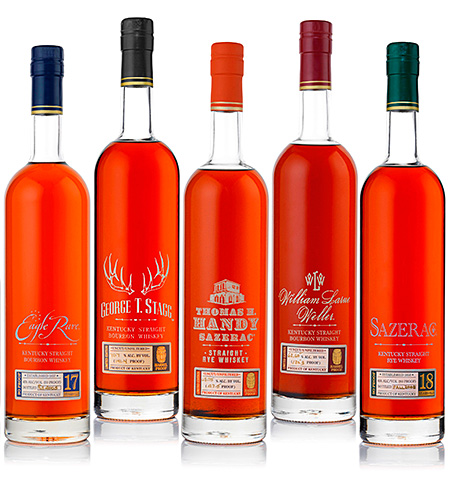 THREE small batch bourbons from the Buffalo Trace distillery were lauded this month when they appeared on a list of the world’s top spirits.

The ranking, compiled by drinks writer F. Paul Pacult and published in the June issue of the Spirit Journal, included George T Stagg Kentucky Straight Bourbon Whiskey at number two, Colonel EH Taylor Barrel Proof Uncut and Unfiltered at number ten and Eagle Rare 17 Year Old Kentucky Straight Bourbon in 20th place.
All three are produced at the Buffalo Trace distillery in Kentucky and distributed in the UK by Hi-Spirits.
George T Stagg and Eagle Rare 17 Year Old form part of the distillery’s 2012 Antique Collection, a range of five whiskies which was released in the UK last October.
The Buffalo Trace distillery has continued to launch new bourbons this year, the most recent of which is the 2012 vintage of its unaged bourbon, White Dog.
Distilled in autumn of last year, White Dog Mash #1 was produced to the same recipe used to create Buffalo Trace, Benchmark, Eagle Rare and George T. Stagg. Unlike those bourbons, however, White Dog is not aged in barrels.
Bottled at 62.5% ABV, the spirit is being promoted to bartenders for use in cocktails.
“There’s strong interest in White Dog bourbons amongst bar professionals, mainly because it’s a flavour profile they haven’t worked with before,” said Hi-Spirits chairman Jeremy Hill.
“Unaged whisky made in the UK isn’t sold commercially, so this is a point of difference for the UK bar market.”