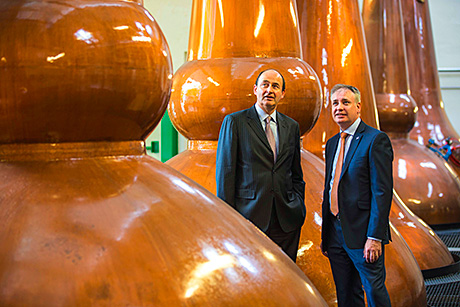 The relaunch of the distillery, which has been ‘silent’ since 1999, was funded from the £40 million annual capital expenditure the firm has committed to its operations.
Prior to re-opening, the distillery underwent a major upgrade, which is said to have increased malt distillation capacity by 50%. Work included the installation of new malt storage facilities, and a new mash house and tun room, which accommodates the new mash tun along with six additional washbacks, bringing the total to 15.
The distillery’s existing six stills were also refurbished.
Energy efficiency upgrades have also been implemented at the distillery, including the installation of new thermo compression systems which are said to reduce energy usage by 15% compared to the company’s second most efficient distillery.
Christian Porta, chairman and chief executive of Chivas Brothers, said the “sweet, fruity spirit” produced at the revived Glen Keith distillery will be aged in oak casks and used in the Chivas Regal and Royal Salute blends “as it was in the past”.
“It is wonderful to see this distillery reopened and producing spirit once again,” said Porta.
“The fact that we are reopening a silent distillery, and are soon to build a brand new distillery in the region, shows just how strong the demand for our luxury Scotch whiskies is.”
The reopening of the Glen Keith distillery follows on from a £10m expansion of The Glenlivet distillery in 2010, which is said to have increased distillation capacity by 75%.
Expansion work at Glenallachie, Longmorn, Glentauchers and Tormore distilleries in 2012, in addition to the Glen Keith upgrades, is said to have increased the company’s malt distillation capacity by a further 25%.
Chivas Brothers also opened a “super-premium” bottling hall in Paisley for hand-packaging the highest value expressions.
The final phase of the investment programme is the expected opening of a new distillery at Carron on the River Spey in 2014.
Richard Lochhead MSP who officially reopened the Glen Keith distillery, said the expansion programme is providing “valuable jobs across rural Scotland”.