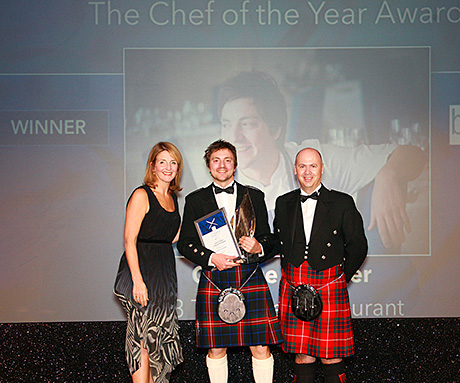 VENUES including Grand Central Hotel and Glenapp Castle were among the winners at a recent event celebrating Scotland’s top catering businesses.

The CIS Excellence Awards 2013 was held at the Hilton Hotel in Glasgow, and awarded hotels and restaurants as well as catering suppliers.
Glenapp Castle Hotel in Ayrshire and the Grand Central Hotel in Glasgow were named winners in the Group Hotel of the Year and Business Innovation categories respectively, while Champany in Linlithgow took the title of Restaurant of the Year and The Blue Coo Bistro in St Boswells took the Pub Excellence Award on the night.
Other winners included Glasgow eatery The Grill on the Corner, which scooped the Innovation in Training award, The Scottish Cafe and Restaurant in Edinburgh, which took the Sustainable Business trophy, and Timberyard, also in Edinburgh, which was named Restaurant Newcomer of the Year.
Graeme Pallister, of 63 Tay Street in Perth, was named Chef of the Year and Alan Hill of Gleneagles Hotel won the Lifetime Excellence Award.