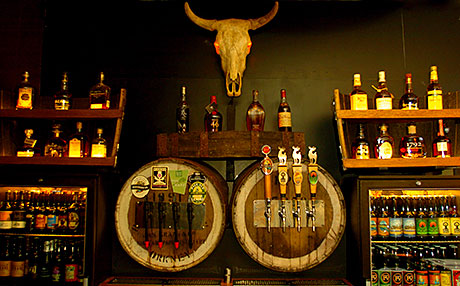 The skull of an American bison is one of the first indications of the stateside influence at new Edinburgh craft beer bar Jake’s Place.

Big Jake, the staff’s affectionate moniker for the bison, watches over the newly refurbished Market Street venue from above the cask and keg beer taps behind the bar.
Named after John Belushi’s character in the 1980 musical comedy The Blues Brothers, Big Jake is a nod towards the strong American flavour to be found on the drinks menu.
Before its current incarnation, Jake’s Place traded as part of the Belushi’s bar chain attached to the St Christopher’s Inns backpacker hostel, which is owned and operated by pub, hotel and hostel group Beds and Bars.
The venue is still owned by Beds and Bars, which operates hostels and bars across Europe, but has been rebranded and repositioned, with a distinct focus on craft beer.
Iain Dempster, regional development manager for Beds and Bars, oversaw the revamp at the start of February this year.
“They gave me the task of designing and creating the place from start to finish,” he told SLTN.
“Everything is completely new. The only thing that’s the same is the bar top.”
Salvaged materials feature heavily in the new-look interior.
Seating includes old church pews and scaffolding beams, while the front of the bar is made from old pallets, and reclaimed light fittings from army barracks hang from the ceiling.
An old school chalk board opposite the bar flags up the craft beer offer.
Although the craft focus marks a new direction for Beds and Bars’ UK venues, Iain has ten years of experience working for the company in Bruges where the bars major in craft beer.
In Jake’s Place, the bottled beer selection is spilt between two fridges each containing 30 to 40 brands, with Scottish craft beers in one and American brands in the other.
On draught, there are eight taps fixed to a reclaimed cask feature behind the bar, with four Scottish cask ales and four keg beers available.
Two American craft brewers – Fordham brewing company from Maryland and Old Dominion brewing company from Delaware – have joined forces with Beds and Bars to launch their beers in Scotland exclusively through Jake’s Place.

Two American craft brewers have joined forces with Jake’s Place to launch their beers in Scotland.

With such a broad range of beers available, the bar has a full list of tasting notes available for each to help customers make their decision.
Bar manager Laurie Ballantine said training is key to ensure staff are knowledgeable about the beers and able to discuss them with customers; there’s also a ‘beer bible’ behind the bar for staff to refer to.
And craft beer is set to feature even more prominently at the Edinburgh outlet going forward, with Beds and Bars planning to utilise its European connections for future events.
“We will be doing a Belgian beer festival, a German festival and we have a location in Prague so we could do a Czech night too,” added Iain. 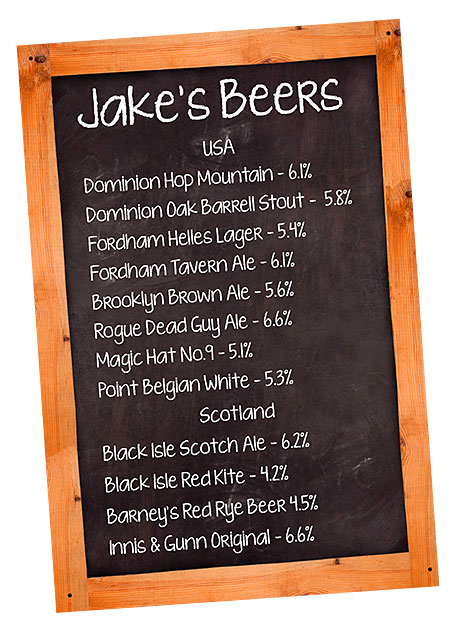 Image – Top, Big Jake, the American bison which hangs in Jake’s Place, was ‘reclaimed from vultures’. Above, Jake’s beers.