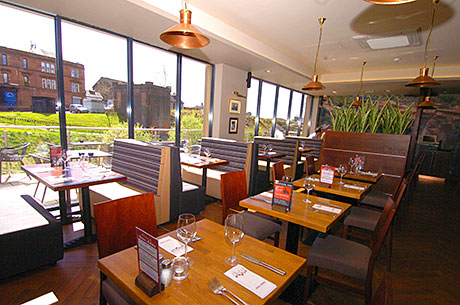 IT’S difficult to imagine that the building occupied by new Italian bar and restaurant Nonna’s Kitchen was, until fairly recently, a benefits office.

The Kirkintilloch premises has been completely transformed by Peter Di Ciacca, who bought the building from East Dunbartonshire Council two years ago and, last year, obtained planning permission to create a 150-cover bar and restaurant. In spite of his relatively tender years, 31 year old Peter was no stranger to the trade when he acquired the building. He also owns three outlets in Bothwell: Italian restaurant Riva, community pub Camphill Vaults and licensed deli Rosso.
But Nonna’s Kitchen was to be his biggest project to date, taking seven and a half months to overhaul the hundred year old building.
“There was a lot of work involved,” said Peter.
“We had to knock down a small existing building to make way for [the restaurant], restore all the windows, fix the roof and replace both chimney stacks and then build the restaurant as an extension.”

None of the furniture is fixed so it can be moved to create different spaces within the outlet.

The space now occupied by the restaurant was formerly a car park at the rear of the building, and preparing the area for construction brought its own set of challenges.
“It’s such a tight space,” said Peter.
“There’s a building right at the back wall. It’s a main street property. There was no site offices, there was nowhere to store anything. We had to dig three metres down, and to do that on such a tight site took us six weeks.”
Not every part of the project was as intensive, however.
Before its use as a benefits office, the building operated as a pub called the Eagle Inn. While few traces of the pub remained, the beer cellar was still intact, and has been pressed back into use. 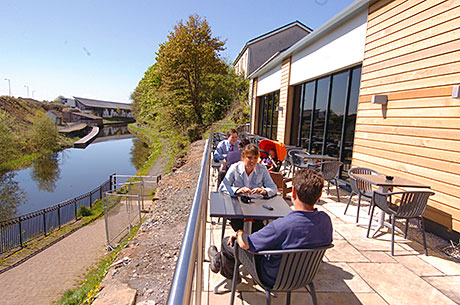 In total, the purchase and conversion of the building cost close to £750,000.
The result is an outlet that Peter described as having “a family feel and a warm atmosphere”.
In fact, family is a constant theme throughout the outlet.
Peter’s own grandmothers (or nonnas, in Italian) provided the inspiration for the eatery and he acknowledges them as being the source of his passion for food (though his father, who runs fish and chip shops in Glasgow, may also have played a role).
Visitors entering through the front door are greeted by black and white photographs of the Di Ciacca family going back generations, and the back wall of the restaurant features a mural by Glasgow artist Nichol Wheatley depicting Picinisco, the family’s home town.
The bar and restaurant areas are separate – customers can enter the new-build restaurant without passing through the bar area in the original property – but the design is consistent throughout.
Furniture, selected by design firm BSD Associates, includes a mixture of plush, cushioned booths and smaller, more intimate tables. In the restaurant area, the rich colours of the wood flooring and tables are complemented by natural daylight from the floor to ceiling windows. A large window into the kitchen allows diners to watch their meals being prepared.
Outside, a newly constructed 50-cover terrace overlooks the Forth and Clyde Canal.

I was trying to create a light, warm atmosphere, bringing the canal into the premises but keeping the old with the new.

“We wanted to have plenty of light coming through,” said Peter. “Very few villages have a canal running through them and we wanted to create a nice feel looking over the canal.
“I was trying to create a light, warm atmosphere, bringing the canal into the premises but keeping the old with the new, because it’s the oldest building in Kirkintilloch.”
Flexibility was another important aspect of the interior design, as parties and events are one of the key markets for Nonna’s Kitchen.
Subsequently all of the furniture was chosen because it can be moved to create different spaces within the outlet.
“The middle section of the restaurant can be one long table, it can be four tables,” said Peter.
“The seats across the windows are all moveable. Nothing is fixed in the whole restaurant; everything can be moved about to create small parties, large parties and private areas.”
This versatility is an important tool for Nonna’s Kitchen, which caters to a wide range of different customers from Kirkintilloch and the surrounding villages. The outlet opens at 9.30am every morning for breakfast and remains open until midnight.
The a la carte menu offers a variety of Italian dishes, including pizza and pasta, meat and fish dishes, but there is a focus on set menus during the week, with lunch and evening options available between Monday and Thursday. Dishes on the three-course evening menu include arancini (rice balls coated in breadcrumbs and stuffed with bolognese sauce), salmone al forno (baked salmon with grilled vegetables and creamy pesto sauce) and bistecca (rib eye steak with pizzaiola).
Drinks are another important part of the business, accounting for around 50% of revenue in the first six weeks of opening, according to Peter.
As with the other aspects of the business, the drinks menu is designed to appeal to as broad a selection of customers as possible. Spirits are provided by Inverarity Morton, with wine supplied by Forth Wines and beer from Tennent’s.
And the development of the premises is ongoing, with a new licensed deli, which will trade under the Rosso brand, set to open this summer.
“Our goal is to expand,” added Peter.
“We’ve got the bar trade, the takeaway trade and the restaurant trade and we want to expand all of those areas.” 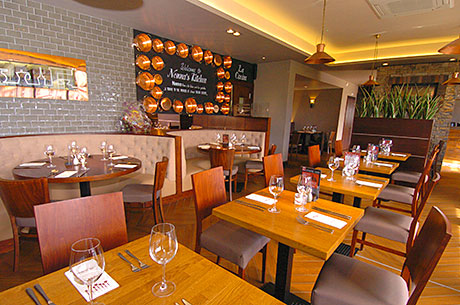 Images – Above, The 50-cover outside area at Nonna’s Kitchen overlooks the Forth and Clyde Canal. The restaurant is a flexible space that can be adjusted to host groups of different sizes.