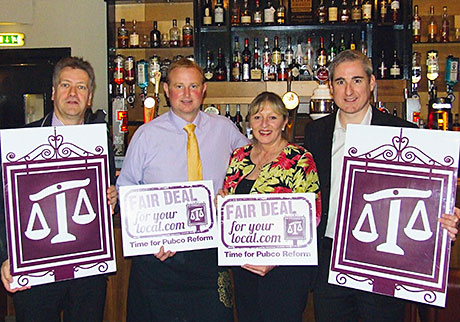 CAMPAIGNERS for pubco reform have called on the Scottish Government to ensure tenants north of the border are covered by a proposed statutory code of practice for large pub companies.

The Fair Deal for Your Local campaign, which wants the tied pubco model reformed so tenants have the option of paying a “fair market rent only” to their pubco, met energy, enterprise and tourism minister Fergus Ewing in Edinburgh on May 22 to outline its objectives.
The meeting came after Scottish lessees learned the proposed code of practice, launched earlier this month by UK business secretary Vince Cable, would only apply in England and Wales.
The campaign, which is co-ordinated by Greg Mulholland MP, chair of the parliamentary Save the Pub Group, and comprises organisations such as CAMRA, the Federation of Small Businesses, the Forum of Private Business and Licensees Unite, wants the mandatory rules for pub companies extended to apply in Scotland.
The code of practice launched by the UK government outlines a number of measures which would apply to pubcos with more than 500 outlets, including that they charge “fair rents and beer prices”, treat tenants “fairly and lawfully” and that “tied pubs are no worse off than free-of-tie pubs”. It also outlines plans for an independent adjudicator, which will have the power to impose fines.
Speaking at the Edinburgh launch, Greg Mulholland urged Scottish lessees to respond to the UK government’s consultation, which closes on June 14.
“We desperately need reform so that hard working Scottish licensees can at last make a fair living which will not only save pubs, but will also be a huge boost for the economy locally and nationally,” he said.
SLTA treasurer and pub tenant Lynn Adams said: “I welcome the consultation but I am deeply concerned that, after years of campaigning, Scottish tenants will miss out. So as well as campaigning for a tied licensee to be no worse off than a free-of-tie licensee, we must also fight to ensure Scottish tenants are represented.”
CAMRA national chairman Colin Valentine said: “After ten years of failed self-regulation, it is time to draw a line in the sand and act.”