The Wine Nation report from Accolade Wines said a change in the weather often prompts a change in people’s drinking habits in the on-trade, with lighter styles of wine finding favour over the summer months.
According to the study, new world wines have continued to grow their share of sales in the on-trade, up 2% last year to 49%. 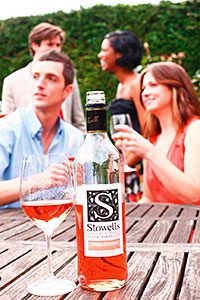 Despite the growth of wines from the new world, it’s those from old world countries which continue to dominate sales in pubs, bars and restaurants.
Sales of Italian wines now generate the most value of all the old world producers, having overtaken France.
In fact, the report claims French wine saw the biggest value drop of old world wines, down 13.9%, and a decline in volume which meant 8.5 million fewer bottles were sold last year compared with 2011.
This is in contrast to New Zealand, which was the only country in the top ten wine nations to show value growth; the value of New Zealand wine sold in the on-trade was up 0.8%last year as overall wine consumption in the UK fell 3.2%.
Accolade’s Wine Nation 2012 report also revealed strong growth for branded wine, up 1.5% in value terms, as non-branded wine dropped 6% in the on-trade. The study cited what it described as a significant price discrepancy as a cause for the variance in performance.
On the back of the report’s findings, Clare Griffiths, European marketing director at Accolade Wines, suggested new world rosé wines as a good bet for the on-trade in the coming months.
“Rosé wines are a popular choice in the summer period as consumers are looking for light, fruit-driven wines to enjoy in the sunshine,” she said.
“New world rosé wines like White Zinfandel from California are particular favourites in the summer time, so stocking new world rosé varietals is a must.”
In the run-up to summer, Accolade advised operators to promote their wine offer in-outlet, using wine lists, tent cards, branded ice buckets and wine recommendations to accompany dishes on the menu.
Griffiths said ensuring staff have a good knowledge of the range is key to maximising wine sales this summer.
“During the summer months, socialising and entertaining are high on the agenda for consumers, whether it be sharing a bottle of wine with friends in outdoor hot spots or al fresco dining,” she added.

Image – Lighter, rosé wines are likely to prove popular during summer, according to Accolade.

• Food outlets (hotels, restaurants and pubs) sell twice as much wine per outlet as non-food outlets.