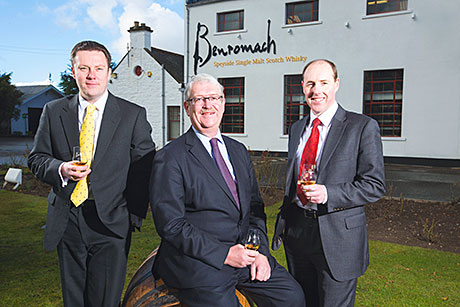 TWO Scottish drinks firms have won royal recognition after being presented with the Queens Award for Enterprise.

Elgin-based whisky bottler and distributor Gordon & MacPhail and Edinburgh beer firm Innis & Gunn were both honoured in the international trade category of the awards scheme.
It is the second time that both companies have won the award, which recognises either a particular achievement or ongoing success in business.
Gordon & MacPhail managing director Michael Urquhart said the success of the Benromach distillery, which G&M bought in 1998, played a role in winning the award.
“We have been championing malt whisky for more than a century by buying and storing casks of whisky from distilleries across Scotland,” he said.
“But it’s been a particular pleasure for us as a family to drive the growth of our own Benromach whisky.”
Meanwhile, Innis & Gunn, which celebrates its tenth anniversary this year, cited its growing presence in markets such as Canada and Sweden as key to its success.
“It’s absolutely true to say that we wouldn’t be where we are now without the legions of Innis & Gunn fans worldwide who buy our beer and I’m always astounded by the reception that I get whenever I visit our overseas markets,” said I&G founder Dougal Sharp.
Each of the three business categories in the awards scheme – international trade, innovation and sustainability – is judged by a separate panel, which then makes recommendations to the prime minister’s advisory committee; winners are then chosen by the Queen.
Other winners in this year’s awards included London-based soft drinks company Fever-Tree, which produces a range of premium mixers.