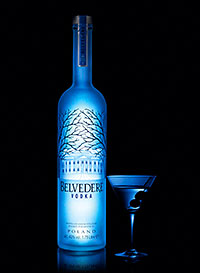 THE firm behind Polish vodka Belvedere has launched a new 175cl illuminated bottle for both on and off-trades.

Previously only available on the three-litre bottle size, the LED, which is encased in waterproof plastic, has been rolled out to 175cl bottles.
Nick Ambridge of Belvedere said the illuminated packaging is designed to strengthen the brand’s presence in nightclubs.
“Belvedere vodka, the world’s first super-premium vodka, is continuing to showcase its ability to inject excitement and edge into the night with the new illuminated 175cl bottle and offer on-trade customers another way to help stimulate sales,” said Ambridge. “The bottle not only looks great in the bottle parade but also in the ice buckets and we think this is going to be a must-have item on the nightclub scene.”

Image – The bottle is illuminated by an LED.