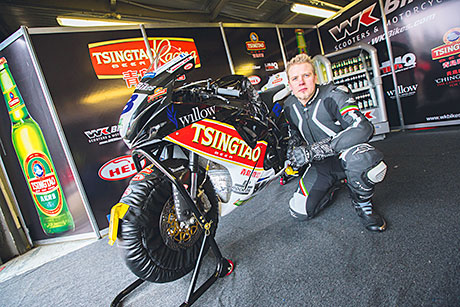 CHINESE beer Tsingtao has been unveiled as sponsor of a superbike team which aims to make racing history with the launch of the first Chinese bike in the Isle of Man TT.

The deal, in association with the British Superbike Championship, Triumph Triple challenge and the Isle of Man TT, saw the beer become official sponsor of the Tsingtao WK Race Team.
Distributor Halewood International said the sponsorship is expected to reach more than 30 million people in 100 countries over the course of the seven-month race season, which is broadcast on British Eurosport and ITV.

Sponsorship of the Tsingtao WK Race Team allows us to reflect the brand’s proud Chinese roots.

Tsingtao WK’s actions on the track will be supported in the on-trade with point of sale material, including bar posters and banners. There will also be competitions running in selected outlets and a social media campaign.
James Wright of Halewood International said the activity is expected to make an impact on a global scale.
“Tsingtao’s involvement with the BSB and TT not only marks motorcycle history, but allows the brand to continue to tell its story of rich tradition, much associated with the TT’s 100 years of culture,” he said.
“We’re keen to take a new direction and foster a relationship with the racing championships, with the Chinese WK bikes allowing us to reflect Tsingtao’s proud Chinese roots.
“Sponsoring the team will also connect the brand with a new audience, and build on previous activity aligned with sport, including the House of Nation’s London 2012 and Dragon Masters table tennis affiliation.
“This sponsorship seeks to build on previous activity to help increase rate of sale and support venues. We believe this is the perfect fit for Tsingtao on a national and international scale.”
Other Halewood International brands involved in the sponsorship include soft drinks brands Willow Water and John Crabbie & Co. The firm said plans for their involvement will be announced at a later date.

Image – Wheels in motion: Chinese beer Tsingtao has been unveiled as the sponsor of a superbike team.