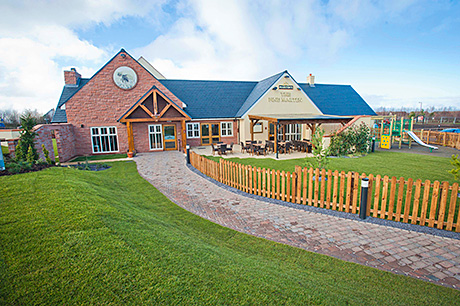 BREWER and pub group Marston’s has opened its first Scottish outlet in the East Lothian town of Dunbar.

And the Wolverhampton-based firm, which operates more than 2000 pubs – 500 managed and 1650 tenanted, leased or franchised outlets –
down south, plans to open a further two pubs in Scotland this year.
Billed by Marston’s as a “rotisserie pub restaurant”, The Pine Marten in Dunbar is a new-build outlet with an “old world” interior design.
The pub is pitched at the family market and has an under five’s family area inside and an outdoor children’s play zone and covered seating area.
The Pine Marten is managed by husband and wife team Steven and Julie Foster, who made the move north from Marston’s Newcastle pub The Shire Horse. The couple has worked for Marston’s for eight years, having started out as assistant managers in Middlesbrough before making the move to Newcastle in 2010.
Steven said The Pine Marten’s food offer includes fresh rotisserie chicken and gourmet burgers.
“It’s a foody place but drinkers are more than welcome,” he said.
The launch of The Pine Marten marks the beginning of Marston’s expansion in Scotland.
It is set to open a further two pubs north of the border this year: The Old Colliery in Shawfair, Edinburgh, is on track for a July launch while The Steam Wheeler at Braehead on the outskirts of Glasgow is scheduled to open on May 13.
Marston’s said the Braehead outlet will offer fresh carvery meals, as well as an extensive range of drinks, including cask ales.
Managers Brett and Jaclyn Murphy began their pub careers in Kilmarnock before joining Marston’s seven years ago. The pair said they are excited to be returning home to Scotland.
“We can’t wait to welcome the community in to sample our extensive menu and to raise a glass to our opening day,” they said.

Image – The Pine Marten in Dunbar is the first Scottish venture for brewer and pub firm Marston’s.