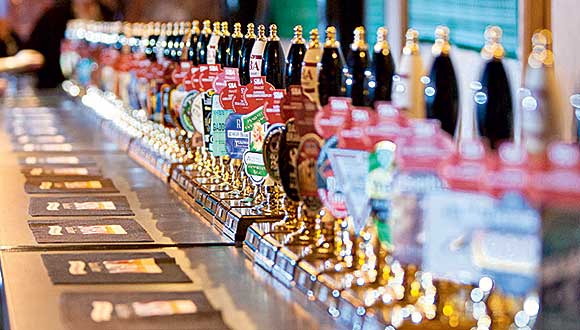 LOCAL beer is offering a “lifeline” to pubs across Britain, according to the Society of Independent Brewers.

Publishing its 2013 Local Beer Report, SIBA said the volume of local beer sold in Britain was up 6.8% last year to more than 1.4 million barrels. Quoting figures from the BBPA’s Beer Barometer, it said on-trade beer sales were down 4.7% over the same period.
The report, based on a survey of 315 brewers – around half of SIBA’s membership, said local brewers across the UK now employ nearly 5000 people directly and produce 3200 permanent ales encompassing a wide range of beer styles.
While brown, copper and amber bitters are said to have held up well against their “flashier blond cousin”, historic styles are said to have enjoyed a “resurgence”, with stouts and porters in the permanent portfolios of more than half of the brewers polled and IPA (India Pale Ale) “revived” by many brewers.
The report concludes that “quality beer” is now being brewed for bottle and keg as well as cask, and the “choice for the discerning and promiscuous drinker is thus being widened even further”.
The local beer boom is expected to continue, with the report predicting a 5.6% increase in volumes this year.
SIBA chief executive Julian Grocock said local beer is in an “age of outstanding growth” against a tough economic backdrop.
“The local brewing industry described in this report is one that we should all be raising a large glass to, such is its positive contribution to the economic and social health of the nation,” he said.
“Local brewing is unusual, if not unique, as a British manufacturing industry that is increasing production and market share, welcoming new producers, generating significant employment, investing for a sustainable future and contributing economically and socially to the hundreds of localities where independent brewers are based.”

Image – The vast array of local beers available in the UK was highlighted at SIBA’s Brewing Competition.