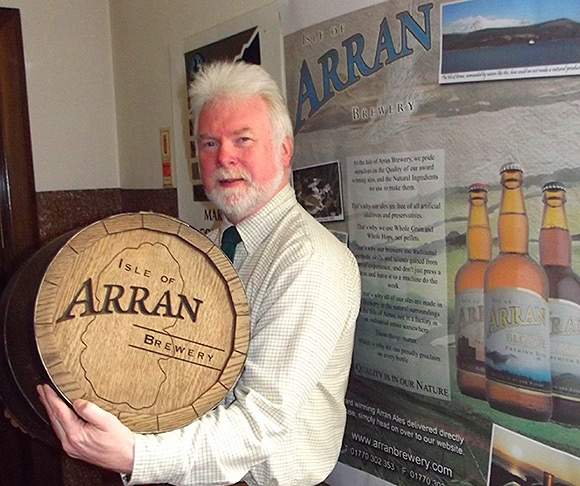 THE Arran Brewery has put the brakes on ambitious expansion plans after failing to secure funding from the Scottish Government.

The company, which is in the process of merging with fellow Scottish craft brewer the Isle of Skye Brewing Company, had applied for a grant through the Scottish Government’s Food Processing, Marketing and Co-operation (FPMC) scheme to expand the brewery on Arran and build a new bottling facility on the mainland.
It was refused a share of the £2.39 million fund in December and subsequently appealed against the decision. But managing director Gerald Michaluk said he was informed last week that the appeal had been rejected.
“We were informed initially that we weren’t going to get the money on the basis that we were merging with Skye and that our growth plans were unrealistic,” Michaluk told SLTN.
“I pointed out that both Brewdog and Innis & Gunn had achieved in similar timescales a lot more than we were projecting so how could they say it was unrealistic?”
Michaluk said the decision has affected several of the company’s expansion plans – including the merger with Isle of Skye Brewing Company and the opening of a new bottling plant on the mainland.
As a merged company, the two breweries would produce more than 5000 hectolitres, meaning they could no longer qualify for the Small Breweries Relief scheme, which reduces the amount of duty paid by small breweries.
Michaluk said Arran Brewery currently pays 24p of duty on every bottle of beer it produces. If production rose above 5000 hectolitres, this could increase to 49p a bottle.
The grant would have helped offset this duty increase; without it Michaluk said Arran will have to continue to limit its production capacity.
However, the funding knock-back has not affected plans to open a string of pubs, the first of which is set for Glasgow.
The company has also applied,
separately, for another grant in the
next round of Scottish Government funding.
Michaluk said the firm is also looking at alternative ways of raising funds in order to continue with its expansion. These include branching out into cider production and distillation.
Other Scottish breweries, including Brewdog and West Brewery, have benefited from the FPMC grant scheme in the past. Isle of Harris Distillery, which is set to be built at Tarbet, was awarded £1.9m in the most recent round of FPMC funding.
A Scottish Government spokeswoman said a committee of food and drink specialists concluded that Arran’s submission did not sufficiently meet the criteria.
“The FPMC grant scheme is competitive and cash-limited and it is therefore inevitable that not all applications can be successful,” she said.