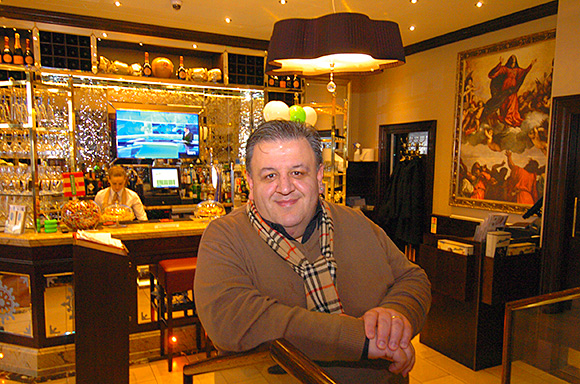 WHEN Marco Arcari says he knows where every screw, pipe chase and air conditioning duct in his latest restaurant is, he’s not exaggerating.

The man behind the Glasgow-based La Vita Group said he lived and breathed the creation of Piccolino e Vino in Newton Mearns.
Marco is no stranger to venue refurbishments, having launched Italian restaurants in Bishopbriggs, George Square and Byres Road over the last 13 years.
But he considers the refurbishment of the fourth in the group as the most satisfying to date.
That contentment has much to do with his decision to manage the project himself. He also relished the sheer scale of the challenge involved.
The project was far from straightforward, and involved combining two adjacent units – a former Peckhams delicatessen and Dunn’s hardware store – into one.
At one stage the plans were even more grand, ambitious though the final blueprint proved to be.
Marco bought the former Peckhams outlet in April 2011 but the space wasn’t big enough for what he had in mind so he began exploring different options, including excavating a basement level.
But a year later he got the floor space he needed when the chance to buy Dunn’s next door came up.
Armed with a clear vision of a “classical yet modern” interior with “a bit of bling”, Marco, his wife Sandra and son Mario worked with Burns Interior Design on a scheme. Kitchen and bar equipment was sourced from New Concept and work on the fit out, by Turnaround shopfitters, got underway in July.
The space previously occupied by the hardware store has been transformed into a bar, where features include a marble-topped bar counter with a bespoke diamond cut glass backdrop (created by Glass Age).
At the foot of the few steps leading up to the main restaurant, which occupies the former deli, lies Marco’s Italian ‘theme box’.
The glass-topped box, which is set into the floor and lit by LEDs, houses limited edition bottles of wine and San Pellegrino. It was inspired by a similar feature at a restaurant in Italy, close to the village where his parents are from.
“My cousin emailed me a picture of the floor in this restaurant which had a box set in it and I came in here the next morning and said ‘we need to dig a trench in the floor’,” Marco told SLTN.
“The shopfitters, the electrician, everyone looked at me like I was mad but I had this idea for an Italian theme box. It grew from there; we added LED lights and my wife came up with the idea of putting the crystals in it.”
The bulk of the features were part of the original plan, though.
The main restaurant is split in two by a large dark wood unit in the centre, displaying Limoncello, amaretti biscuits, Pannetone and other Italian treats and gifts that are available to buy.
The 95-cover space is furnished with fixed and loose seating, upholstered in deep red leather and flock-style fabric, and dark wood tables; diamond cut glass adorns the pillars.
Floor to ceiling glass doors, which run along the front and side of the outlet, flood the restaurant with natural daylight, and permission has been secured for a 38-seat outdoor area.
But diners have to look up – not out – to enjoy the boldest design feature.
Large framed images of paintings by Michelangelo, Caravaggio and Leonardo da Vinci have been set in the ceiling recesses in a nod to the restaurant, and its owner’s, Italian roots.
Completed in just 11 weeks in time for the October 2012 launch, the project cost a total of £900,000, which includes the purchase of the two units.
It’s a hefty investment, particularly given the current economic climate, but Marco is confident it’s been money well spent.
“It is a big investment, and launching anywhere new there is always a slight worry right up to the last minute,” he said.
“No matter how much you research the area, you never know until you open the door.
“But I know this side of Newton Mearns and I thought it lacked something. I believed in the site and I believe in what we do.
“And it has been really busy since we opened; people have embraced it.
“I brought staff here from the other restaurants because they know what we are looking for.
“Running a restaurant is not easy and to hit the ground running was a lot easier because of the staff. And there’s always one of us [Marco, Sandra or Mario] here.
“It takes over your life but this is not a job, it’s a way of life and you need to have passion for it.”
Such is Marco’s passion for the restaurant business that he’s already considering a fifth outlet.
“We are looking at something else,” he added.
“We’ll definitely open something else in the future, no question.
“This was the smoothest [refurb] I’ve done. I think that was because we ran it ourselves; it’s probably the most satisfying.
I don’t think it gets easier [opening restaurants] but you understand it better as time goes on and you know exactly what you’re getting yourself in to!” 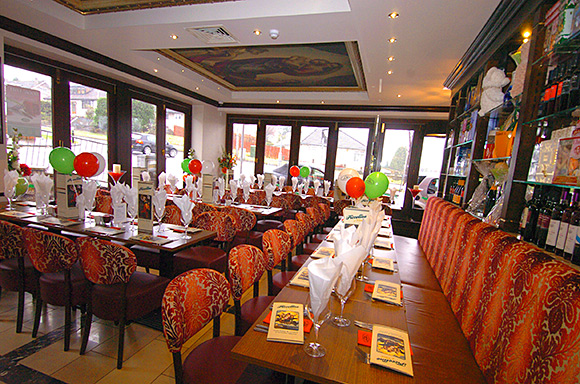 Images – Top, Marco Arcari said he wanted to create a “classical yet modern” interior with a “bit of bling”. Above, Floor to ceiling doors along the front and side of the premises flood the restaurant with natural daylight.