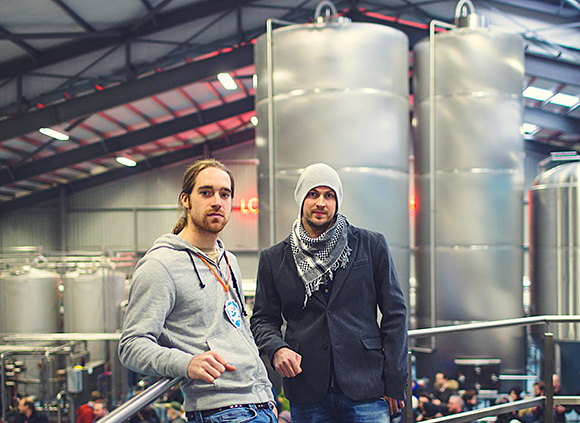 The brewer already exports its beers, which include Punk IPA, Libertine Black Ale and Dogma, to more than 30 countries around the world and has built a group of ten bars in the UK, including outlets in Aberdeen, Edinburgh and Glasgow, in the last three years.
Now the company, established by Martin Dickie and James Watt in 2007, aims to open BrewDog craft beer bars in Sweden and Brazil.
The global expansion plans were unveiled as it opened a new purpose-built brewery in Ellon, close to its original brewery and HQ in Fraserburgh.
Speaking to SLTN last week, James said the new £7 million facility, which was part-funded by the 7000 shareholders in BrewDog’s Equity for Punks scheme, will increase production capacity tenfold. With production shifting to the new premises, the original facility in Fraserburgh will be used as an experimental lab for creating and testing new brews.
BrewDog also intends to bolster its nine-strong core range with two new beers: the 7.5% ABV Jack Hammer IPA and Cocoa Psycho, described as a 10% ABV “decadent Russian Imperial stout”; as well as continuing to add to its limited release brews.
James said the expansion will allow BrewDog, which has produced what’s said to be the world’s strongest beer, brewed at the bottom of the ocean and packaged beer in roadkill, to continue to “challenge people’s perceptions” of beer.
“We started out five and a half years ago with two humans and a dog and we’ve now got 160 staff and ten bars across the UK,” he told SLTN.
“We’ve got bars in Leeds and Liverpool due to open in the next four to eight weeks and we’re aiming to open in Stockholm in mid-March; Sweden is our biggest export market. Then hopefully Sao Paulo will open mid-May.
“The new production facility in Ellon will give us the capacity to keep up with demand for our beers and we’ll keep the old site in Fraserburgh for experimental batches.
“The sector is not going through the best of times but I think that’s down to a lack of choice because a lot of the pubs in Scotland are tied so can offer limited choice.
“As well as our own bars, we sell to a lot of independent bars in Scotland and we’ve got a lot of customers that have been with us for a long time.
“We like to challenge people’s perceptions when it comes to beer and we’ll keep on doing that.”