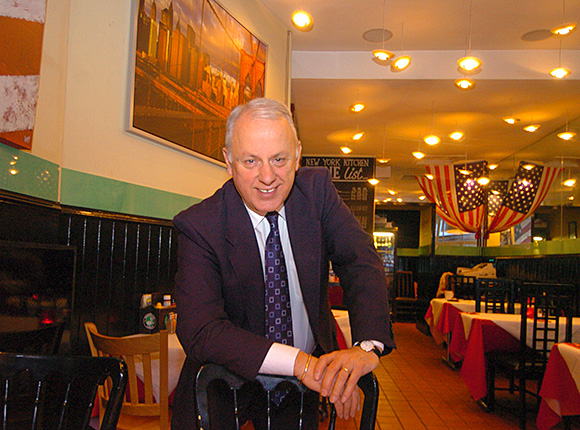 IT wasn’t Frank Sinatra’s rousing tribute to the Big Apple that greeted SLTN the day it visited Partick’s newest restaurant.

But, between Ol’ Blue Eyes’ velvet tones and the Statue of Liberty mural, there’s no mistaking the inspiration behind the new American-style diner in the western reaches of Dumbarton Road.
Eddie Tobin, the high-profile campaigner for the late-night trade who also runs successful cleaning and security businesses, confirmed his comeback as an operator in his own right with the launch of The New York Kitchen in Glasgow’s west end shortly before Christmas.
The venue is the new incarnation of Pinxto, the Spanish tapas bar established by the late Allan Mawn, and next door to Mawn’s Velvet Elvis Scottish restaurant.
Eddie, who formerly held senior operations roles with Stakis, Carnegies and Scottish & Newcastle, has been helping to administer Pinxto, Velvet Elvis and Criterion, also on Dumbarton Road, on behalf Mawn’s estate since the operator died two years ago.
And the return to frontline operations seems to have whetted his appetite for more.
The New York Kitchen is Tobin’s tribute to the classic diner loved not just by the good folks of the Big Apple but consumers throughout the UK.
There’s nothing pretentious about it, Eddie explained – just no-nonsense steaks, burgers, meatballs, beer and milkshakes.
“The New York Kitchen is a full-blown American diner,” Eddie said. “We do milkshakes, ribs, meatballs and burgers.
“The American food model is successful throughout Britain.
“The food [here] has to be better than any other American food you’ve ever eaten – that’s the objective.
“If this one works I plan to roll it [the concept] out.”
Eddie’s commitment to providing keenly priced but good quality US fayre reflects the investment he has made in the business. More was spent kitting out the kitchen with new cookers and grills – equipment needed to create American dishes – than on any other aspect of the venue.
That’s not to say the New York theme is not abundantly clear to the consumer.
Murals commissioned from a local artist depict such American icons as the Stars and Stripes and the Statue of Liberty, with the famous I ❤ New York slogan applied to blackboards and menus.
Six-pack cartons of Brooklyn lager (brewed in New York, naturally) have also been artfully deployed to hold condiments, and the tablecloths and menus feature the classic red and white check design typically seen in US diners.
But overall the theme isn’t too forced and more subtle than the approach taken by corporate hospitality brands.
On that basis, it blends nicely with the eclectic mix of bars and restaurants that line the western reaches of Dumbarton Road.
Eddie reckons The New York Kitchen complements the other food and drink offers in neighbouring venues – and is confident that, surrounded by countless tenement flats and the Glasgow Harbour apartments, there is a big enough audience to sustain them all.

The food has to be better than any American food you have ever eaten.

“There’s a proposal for a new food offer for Criterion that would give people three food options [in the immediate area], which is good because we’re quite a way from Byres Road” Eddie said.
“There’s a Mexican restaurant across the road and Velvet Elvis next door is Scottish fayre – we don’t think the two businesses clash. Velvet Elvis is successful and I believe this will be successful too. There aren’t too many licences at this end of Partick but this is a community, no doubt about it.”
If Eddie can make it there, one suspects he’ll make it anywhere. 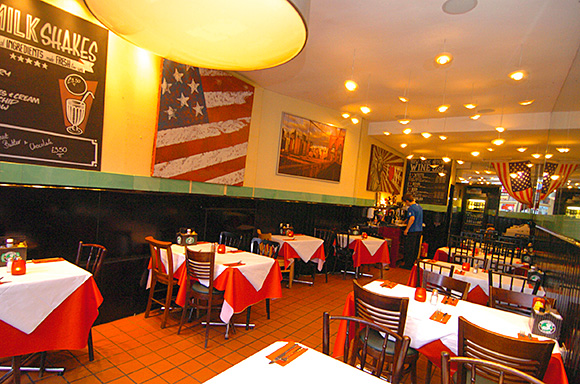 Images – Top, Eddie Tobin is enjoying his return to the trade at the Partick restaurant. Above, There’s no mistaking the influence at Eddie Tobin’s New York Kitchen on Dumbarton Road, Partick. Eddie aims to provide the best American food around – and reckons there’s a ready-made audience for it on its doorstep.