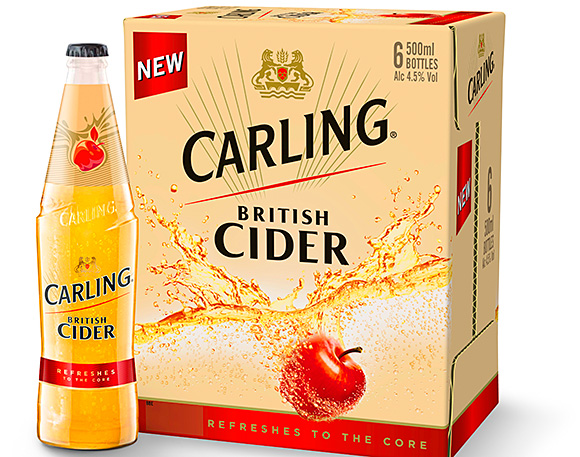 MOLSON Coors is set to make its first move into the flourishing cider market with the launch of Carling British Cider – in the UK off-trade.

The 4.5% ABV cider, available in 500ml and 275ml bottles, will be launched exclusively in shops in March.
The move follows other recent examples of brewers attempting to plunder a burgeoning off-trade market said to be worth £869m last year, a 9% increase in value terms in the 12 months to August 2012.
AB InBev launched its Stella Artois Cidre brand in early 2011, and Carlsberg made its first move into the market in July with the launch of its Somersby brand.
Coors said the new bottle is designed to reflect the product’s “premium and modern” credentials.
The brewer spent a year developing the cider, and said consumer tests produced favourable results.
To support the launch, Molson Coors is investing a claimed £4.5m in an integrated marketing campaign, which builds on last year’s ‘Brilliantly British, brilliantly refreshing’ Carling slogan.
It said Carling British Cider is designed to appeal to a wide cross-section of consumers, and aims to replicate the success of Carling Zest, a seasonal, limited edition lager that was launched last year.
“Carling British Cider adds to the diverse portfolio of drinks we already offer to our off-trade customers and their shoppers,” said brand director Jeremy Gibson.
“Following 30 years of success for Carling, we are entering a growing cider market using the strongest brand name in the industry.”
Meanwhile, a campaign to promote ‘heritage’ cider brand Symonds Founder’s Reserve has been launched.
It will see ambassadors visit pubs up and down the country to hand out free samples and give people the chance to win £100 in a free to enter draw.
Bar staff can also win ‘on the spot’ cash prizes by suggesting Symonds, ultimately owned by Heineken, when they are asked by ‘undercover testers’ to recommend a cider.