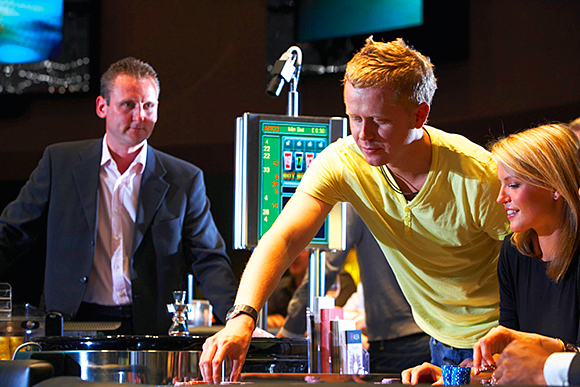 THE stakes were high when the Alea casino threw open its doors in March 2008.

An eye-popping £25 million was invested by London Clubs International, ultimately part of the Caesars empire, to bring a touch of Las Vegas glamour to Glasgow’s riverside.
Not only did it aim to provide a gaming offer to rival Vegas, from the high-tech slot machines to the Punto Banco played in the VIP room, it strived to offer a standard of food, drink and entertainment (spread over multiple areas on two vast floors) that was also the equal of the ‘Strip.
Five years on and the venue is a popular fixture on the Glasgow going out scene, used as much for its multifarious gaming attractions as its Red Leaf restaurant and events in its spacious function suite.
Managing director Paul Rety said Alea set out to challenge the stereotypical image of what casinos are all about.
Sure, he wants people to have the chance to sample the full casino experience; indeed, there are “showgirls” who teach you how to play.
But he’s just as happy for people to come to Alea for a meal, cocktails or an Elvis tribute night; some 50% of its customers at weekends are female, a “phenomenal” statistic, in Paul’s view.
“The perception [people have] of a casino is either one of two things – they either see somewhere small, smoky and dingy, or they see Vegas.
“We try and break down those perceptions.
“We want people to see it’s a place they can eat, drink and enjoy themselves, and to play if they want to.
“The priority is for them to have an all-round enjoyable experience within the venue.
“In saying that, Glasgow has bought in hugely to the Vegas theme; people in Glasgow seem to like the Vegas ideals and party town [image].”
Alea employs 120 staff, half of which work in its food and beverage department, and continues to be run by the same senior management team that launched it five years ago.
It arrived at a watershed in UK gambling history.
The Gambling Act 2005, which came into effect in 2007, lifted several restrictions on casinos, including the requirement for customers to be members, and introduced three categories of casinos (regional, large and small) with each category reflecting the level of gambling allowed.
Alea also came as poker was breaking out into the mainstream; more people were playing online and matches involving celebrity players appeared on TV.
Poker matches were also becoming commonplace in pubs thanks to the changes in gaming laws.
Paul said Alea was the first in Scotland to fully open its doors to non-members but insists that with greater access has come responsibility.
He is keenly aware of the criticism the gambling industry meets in some quarters, and said that while Alea is a money-making business, “it’s not in its interests” for people to lose heavily.
Its staff are highly trained to monitor people’s behaviour and step in if there’s a risk of things getting out of hand. He said the casino also donates heavily to GamCare, the charity which helps people with gambling problems.
Paul conceded the recession is continuing to have an effect on consumer habits, but on balance insists Alea is in good shape.
“People will always have the propensity to spend if you offer the right product to them,” he said.
“What you find is that, rather than go out three times a month, people will go out once or twice but will spend. It’s up to us to give them the offer.”