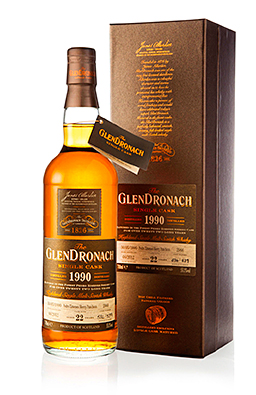 A SINGLE cask expression of GlenDronach distilled in 1990 has been named Whisky of the Year by Scottish Field.

The whisky took the top award in the country lifestyle magazine’s annual Whisky Challenge, after competing with 44 other whiskies.
As well as the top award, GlenDronach 22 year old Pedro Ximenez Sherry Puncheon Cask No 2966 was awarded the gold trophy in the over £80 category.
Other winners included Cutty Sark 25 year old Tam O’Shanter edition, which was named Top Blend, and Big Peat Christmas, which was awarded the title of Best Independent Bottling.
Aberlour A’bunadh won the gold award in the under £35 category, with Lagavulin Double Matured 1994 taking gold in the £35-£80 segment.
“We’re obviously really pleased to win the big award,” said GlenDronach sales director Alistair Walker.
“We release a number of single cask bottlings from GlenDronach each year, with vintages ranging from 1971 to 1996, and they are very popular.
“For the 1990 cask No 2966 to receive such fantastic recognition helps to underline the quality across the range of single cask releases from GlenDronach.”
The 22 year old single malt was bottled in June this year at a cask strength of 55.1% ABV. Only 539 bottles were produced, retailing for around £95.99 each.
The results were decided by a panel of specialist whisky retailers.

Image – GlenDronach said the recognition of the 1990 cask highlights the strength of its single casks.