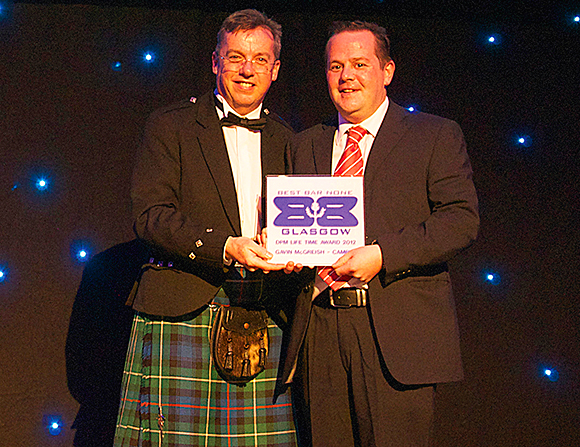 CAMPUS and The Arches took the inaugural lifetime achievement awards as more than 80 Glasgow venues were honoured for safety standards at the city’s eighth annual Best Bar None Awards on November 15.

Gavin McGreish, who runs Carlo Citti’s student venue Campus on Sauchiehall Street, took the lifetime achievement award for a designated premises manager, having picked up the gong for most outstanding premises manager for the last two years.
It comes shortly after Campus lifted two SLTN Awards at the 2012 event on November 1.
The Arches, which celebrates its 21st birthday this year, took the first ever lifetime achievement award for a venue.
The two new awards, introduced to recognise operators and venues that have consistently won gold awards, were presented alongside other special accolades before 250 guests at the Grand Central Hotel in Glasgow.
The Strathclyde Fire & Rescue Award went to Sauchiehall Street club The Garage, Missoula on West George Street won the Apex Radio Award, G1 Group’s November outlet in Princes Square took the award for Most Improved Venue, and One Up in Royal Exchange Square was named best Overall Newcomer.
The award for designated premises manager of the year went to Kirsty Smith of The Cathouse on Union Street.
Owners and managers of 85 pubs, clubs and other licensed venues were presented with gold, silver or bronze awards in recognition of steps taken to prevent problems like binge drinking and anti-social behaviour. Participating venues were inspected by Strathclyde Police’s licensing teams and judged on criteria including the five licensing objectives.
The overall gold award for standard premises went to JD Wetherspoon’s Society Room on West George Street, the Tunnel on Mitchell Street took the overall gold for late premises, while The Arches and SECC took the top awards in the specialist premises category.
This year, the Glasgow awards scheme was sponsored by Diageo, Molson Coors, Heineken, Slaters, Grand Central Hotel, Blythswood Square and Finnell & MacMillan Hairdressing, and supported by Glasgow’s Alcohol and Drug Partnership and the Scottish Business Crime Centre.
An iPhone app, which allows revellers to find Best Bar None Award-winning venues, was launched at the event.
Phil Walker of Glasgow Community & Safety Services, which runs the awards, said the scheme has gone from strength to strength since it launched in 2005, when just 35 awards were presented.
“This year’s awards have been a resounding success and the increasing number of awards is testament to the prestige of this initiative and to the hard work of the licensees,” he said.
“It is fitting that their efforts are recognised as they contribute greatly to the quality of Glasgow’s hugely popular social scene.”
Superintendent Niven Rennie of Strathclyde Police said the inspections carried out for BBN are “rigorous and in-depth”.
“To achieve these awards premises have to demonstrate the preventative steps they’ve taken to make their environment a safe place to socialise,” he said. “It benefits both the customers and the venues in addition to the city’s economy.”
The Best Bar None Glasgow Awards 2012 followed presentations in Fife and Aberdeen.
In Aberdeen, 24 outlets were awarded gold, silver or bronze awards, while in Fife, 25 honours were presented.