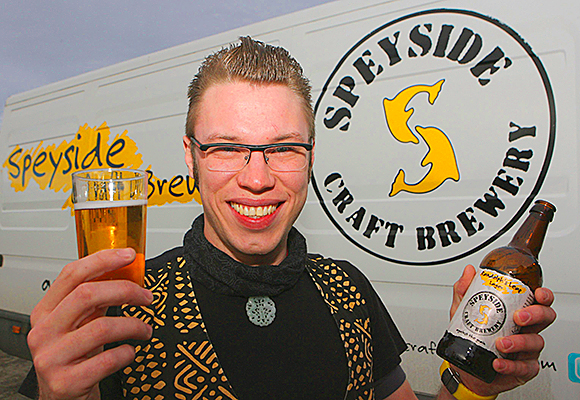 A NEW craft brewery has been launched in Speyside – the heart of ‘malt whisky country’.

The brainchild of former Aberdeen University chemistry student Seb Jones, Speyside Craft Brewery in Forres was due to unveil its first two beers as SLTN went to press.
Randolph’s Leap Lager, which takes its name from a local beauty spot, and Moray IPA will be available in bottles from Elgin-based Gordon and MacPhail and in cask from the brewery or through the Society of Independent Brewers’ links with online drinks wholesaler Ooberstock.
The brewery, said to be the only one in Morayshire, started with a weekly production capacity of 4200 pints and aims to add more beers, which will be named after local landmarks, in future.
Jones said he launched the brewery because he wanted his home patch of Moray and Speyside to be known for more than great whisky.
“I’m using the same remarkably pure water as many of the distilleries for the beer, and our trial brews have been very successful,” he said.
“With Speyside’s worldwide reputation for the finest malts, the lack of a proper brewery is the one key ingredient missing from the area.
“I want my beers to be sold far and wide in the UK and abroad, and by carrying names synonymous with the area I hope it attracts people to visit Moray.”
Richard Lochhead, MSP for Moray and cabinet secretary for rural affairs, said Scotland’s food and drink sector is of “critical importance” to the economy.
“Here in Moray we have many world-renowned brands and it is fantastic to see a young entrepreneur like Seb tapping into that strong reputation and the demand for quality produce,” he said.
“There is a market for craft brewing that can be exploited with good quality products and strong marketing, and I know that Seb has a huge amount of enthusiasm for this new business as well as his knowledge and technical expertise of brewing.
“I wish Seb every success for the future with his new addition to Moray’s very varied food and drink larder.”

Image – Raising a glass: Seb Jones has launched the first two beers from his new brewery.