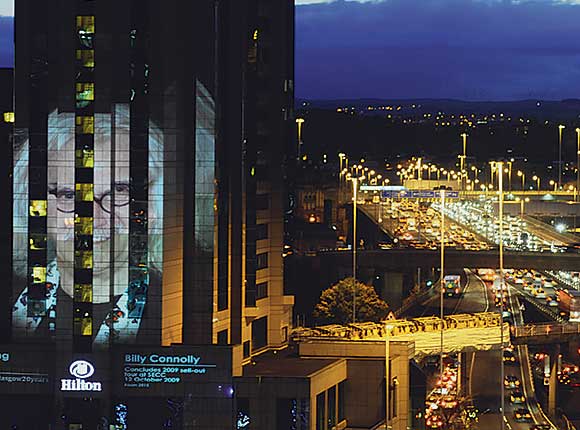 GLASGOW’S five-star Hilton Hotel is confident the worst of the economic slump is over after a year that’s seen it invest heavily in three new food and beverage areas and business boosted by the Olympics.
The hotel, which celebrated its 20th birthday last week, reports that REVPAR (revenue per available room) and occupancy are up on last year, and expects the trend to continue both next year and into 2014 – the year the Commonwealth Games comes to Glasgow.
Hotel manager Daniel Van Wyk said the development of three discrete eating and drinking areas – the Connich Bar, Morblas Restaurant and Ti Tea Lounge – as well as the renovation of the lobby has sent a message to consumers that things are looking up.
Van Wyk outlined the rationale behind the changes made to the property, which Hilton manages on behalf of investment firm Topland, to SLTN last week. “Over the past few years we’ve refurbished all of our bedroom stock,” he said.
“And what we realised is that we have about 100,000 covers coming through the doors [for major functions] that don’t necessarily stay with us and don’t see the difference we’ve made in the bedrooms,” he said.
“We wanted to show people when they come in all the good work we’ve done. That was the reasoning behind it.”
“There’s also a case to be made for the ‘halo effect’ in hotels – if someone walks into a nice well-designed lobby, it changes their perception of the hotel. It’s sending a message out there that business is looking up after the recession and things are moving on.
“We operate all over the world and in most cities in the UK. This was the first year we have seen an uplift after the recession and we expect that to continue.”
While a recent survey found that the Scottish hotel trade endured a difficult August, the month the Olympics took place, the Hilton bucked the trend.
The hotel played host to several teams who took part in the Olympic football matches at Hampden, and despite the enhanced security the Olympic circus imposed, the Games did bring an increase in business.
“The Olympics helped us a lot this year as well; we were fortunate enough to partner LOCOG and we hosted quite a few of the football teams here,” Van Wyk said.
“That boosted business a little in a quiet period for us.”
Looking ahead, Van Wyk said the hotel was moving into a hectic spell of office parties and seasonal celebrations.
Beyond Christmas there are plans, he said, to build an audience for its three new outlets among non-hotel residents in the Glasgow area. The initial focus will be on the Ti Tea Lounge, which will make a play for the afternoon tea market.
“We have on ongoing programme to upkeep our buildings and remain competitive in the market,” Van Wyk added.
“Hotels generally have to reinvent themselves every five to seven years because there’s so much competition opening everywhere.
“After the recession there was a bit of a halt to see what the market was doing.
“The fact that we’ve spent that money shows how positive we are – and we think it’s an investment well made.”