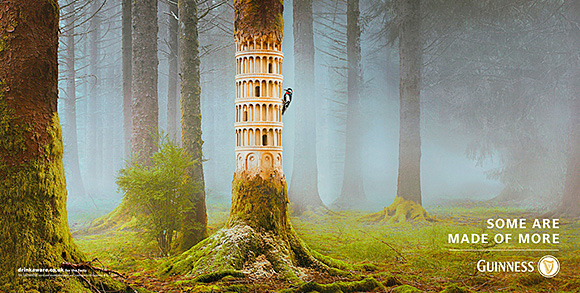 GUINNESS is the focus of a new multi-media marketing campaign to promote its new ‘made of more’ brand positioning.

The activity includes a new TV and cinema ad called ‘Cloud’, which shows a cloud that chooses its own path by breaking away from the others to explore a city; no longer a simple cloud but something ‘made of more’, it engages with people, sees itself reflected in a mirrored skyscraper and darkens as it approaches the scene of an industrial fire.
The ad ends with the cloud drifting towards the ocean and gradually merging into a swirling pint of Guinness with the strapline: ‘Guinness. Made of More’.
Press and poster ads, meanwhile, feature a number of creatures, including a woodpecker which sculpts an unusual house and a caterpillar which nibbles a detailed scene out of a leaf.
Guinness brand manager Nick Britton said: “The idea of something being made of more is one that really reflects a shared attitude Guinness has with its drinkers who love the distinctive look and taste of Guinness and aspire to get the most out of every aspect of their lives.”

Image – Print ads feature creatures that are ‘made of more’, including a caterpillar and a woodpecker.