Industry is losing too many young stars, says Paul Hart, executive chef at The Scotsman Hotel 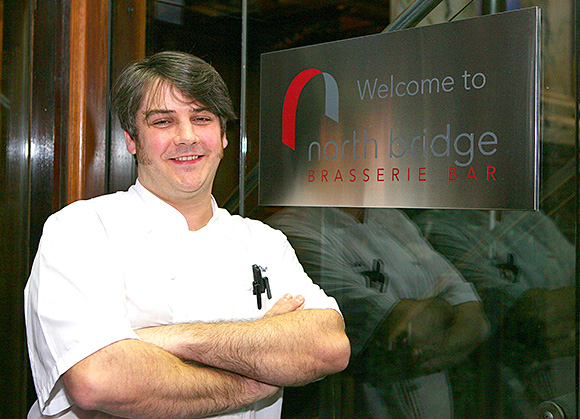 THE catering industry must work harder to attract fresh talent – and avoid losing the skilled staff it already has.

That’s the message from Paul Hart, executive head chef at The Scotsman Hotel in Edinburgh.
Paul joined the prestigious hotel two years ago from another top flight venue, The Old Course Hotel in St Andrews, and heads up the 11-strong brigade that caters to a diverse customer base across the Scotsman’s restaurant, bar and function rooms.
Speaking to SLTN last week Paul said there is a shortage of aspiring young chefs in the industry, and claimed that working conditions have to be reviewed if more youngsters are to consider it as a career.
The executive chef said he recently lost a talented young member of his own team, who opted for a nine-to-five job over the longer working hours in the kitchen.
“I think the days of chefs having to do a 14/15 hour day and getting paid a pittance, just for the love of it, has got to be looked at,” he said.
“Businesses need to look at that. It’s not sustainable. We’re losing too many people out of this industry now.
“Why wouldn’t people just leave and work in a mundane job, where they don’t have any stress and they earn better money?”
And Paul said the problem is not limited to the kitchen.
“We’ve got to look at it as an industry to try and get people involved,” he said. “Front of house as well.
“A lot of places have just got part-time staff – it’s not so much a career. Not like on the continent, where it’s a definite career.
“You go to a restaurant in Italy or France and there’s guys of 40 and 50 working as waiters.
“That’s their career. It’s what they’ve done all their life.
“Over here you mostly find students, apart from in the top restaurants. It’s difficult to get the staff.”
With the financial rewards tending to increase as chefs move to senior positions, Paul advised aspiring chefs to “think long term” about their careers.
“It’s got great rewards,” he said.
“It’s a great feeling at the end of the day, when you’ve been working hard all day and cooked for all these people.
“And you can go anywhere in the world with it as well. People always need to eat.”
The executive chef has first-hand experience of travelling with his profession.
Originally from Wales, he has worked in top restaurants in London (Bibendum), Bath (the Moody Goose) and Oxford (Manoir aux Quat’ Saison) as well as a trip ‘down under’ for a stint at the Sydney Opera House (cooking, not singing).
His first job in Scotland was at Cringletie House in Peebles, before moving north to St Andrews and the Old Course Hotel.
Paul joined The Scotsman Hotel in 2010, where his role includes creating seasonal menus for the hotel’s North Bridge Brasserie, as well as dishes for room service, functions and weddings.
According to Paul, there is no set ‘style’ of food at the hotel, with the cuisine described as “international, but using good Scottish ingredients”.Dishes range from haggis, neeps and tatties to roast venison with buckwheat and walnut granola, and hot chocolate mousse with toasted marshmallow ice cream and crunchy milk rocks.
“My philosophy of food has always been [to use] seasonal produce,” said Paul.
“This is something that’s very ‘in’ now, but I’ve been cooking like that for years. Back when I was at Bibendum in 2000, the real ethos there was that as soon as something came into season you got it onto the menu.
“That was how we always worked and that is how I’ve worked ever since.”

Image: Paul Hart has strong views about what the industry needs to do to retain the best emerging young talent.