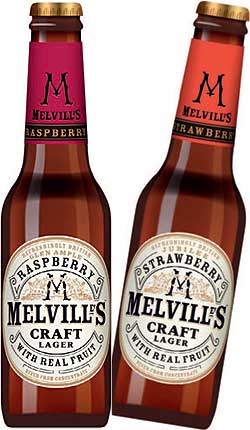 A CRAFT fruit beer has been launched by Edinburgh-based Innis & Gunn.

Following a trial last summer, the Scots beer firm has added Melville’s as a permanent extension to its range of oak-aged beers. Described as “refreshingly British”, Melville’s is available in Strawberry and Raspberry variants (both 4.1% ABV) in 275ml bottles in the on and off-trades.
The fruit beer is based on a “pure brewed” lager made of 100% malted barley, hops, yeast and water, which is then blended with Glen Ample raspberries and Jubilee strawberries.
Melville’s etched tankards will form part of the point-of-sale material distributed to on-trade outlets to support the launch, while a dedicated website has been launched to help consumers find their nearest stockist.
Innis & Gunn chief executive Dougal Sharp said sales of flavoured beers have soared 80% in the last year.
“There is a lot of opportunity in this category and we are the first brewer to put in a serious British bid,” he said.
“We trialled our fruit beer concept last year in Tesco, during their beer festival, and came away from it with very positive reports in terms of sales and feedback.
“This has enabled us to return to market this year with an even stronger proposition.”