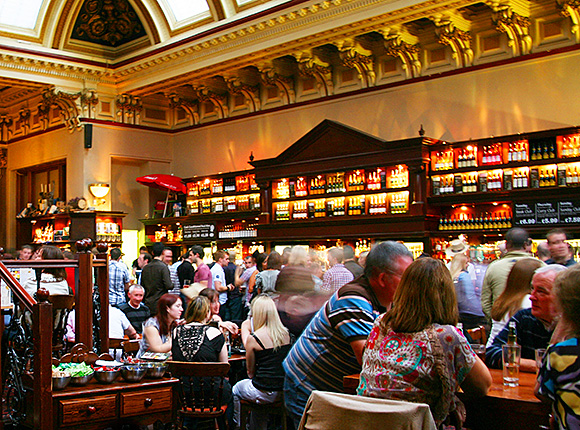 IT was interesting to read the latest alcohol harm statistics, announced by Alcohol Focus Scotland (AFS) this month ahead of its annual conference.

The figures purport to show the cost of alcohol abuse in each local authority area. Glasgow was said to be the worst ‘offender’ with a £364.7 million bill.
The stats relate to the cost in dealing with crime, to the NHS and social services, and “productive capacity”. They have been extrapolated from a Scottish Government study for 2007 called The Societal Cost of Alcohol Misuse in Scotland.
I am not, at the time of writing, in a position to pass comment on the detail of that study or how AFS extracted its figures from it, but I would note that the figures are five years old and it is well known that alcohol consumption has fallen year on year in Scotland since 2007/2008.
It is, of course, the right of AFS to do what it can to highlight the effects of misuse.
But what is often lost in the mainstream reporting of alcohol is any sort of balance.
While the headlines continue to build the picture of what former Lord Advocate Elish Angiolini called the “alcohol apocalypse”, there is little or often no alternative view. If we are to have a proper debate we need to consider the benefit as well as the detriment alcohol can bring.
Licensing boards and even sheriffs are criticised for ‘not doing enough’, but they must act within the law.
Generalised alcohol harm stats cannot be used in a licence hearing as a weapon to refuse an application.
The law requires boards to proceed on an evidential basis with each application taken on its own merits. In other words, a board has to be satisfied that detriment can be linked to a particular premises.
In the 19th and early 20th century, the temperance movement was supported by the government of the day, which passed a series of temperance Acts to allow a local veto, which is effectively what AFS is now saying boards should have. But the temperance movement failed and the Acts were repealed – they didn’t work.
What we should be doing is exposing the underlying reasons why individuals choose to abuse alcohol. Instead, we seem to be introducing more and more red tape and badly drafted law which penalises responsible businesses.

General alcohol harm statistics cannot be used as a weapon to refuse an application.

The fundamental problem is getting to the root of the social, economic and intellectual poverty which blights the country and leads some people to abuse alcohol.
You can’t lay the blame at the door of the licensing boards, which after all can only act within the law – and if they do not, risk exposing themselves to costly appeals.
Licensing boards cannot be positioned as the vanguard of the health lobby at the expense of the law and other matters which are of equivalent importance to their quasi-judicial function, not least of which, the four licensing objectives other than health.
The benefits brought by the responsible sale and consumption of alcohol must also be highlighted. How much does the alcohol industry contribute to the economy? How much tax does it pay? How many jobs does it provide? What role does it play in tourism? How do these businesses help local communities thrive?
The health lobby has argued that licensing boards should close themselves to all of that.
The Scotsman newspaper picked up an example of a balanced approach, from Edinburgh licensing board member Joanna Mowat, who said: “That we have a problem with alcohol is indisputable, but if someone wants to have a drink, they will find a drink.
“We need to make sure that the measures we take to combat this problem are the right ones. We need to make sure when we are licensing we are not preventing someone from making a living.”
The board has to take a holistic view of all relevant information that is available to it: the good and the bad.
There also has to be a move away from the “folk devil” approach of laying the blame at the doors of “morally corrupt” licensees. That kind of approach does not wash and is a slight on the vast majority of licensed businesses who are trying to make a living.
Too much regulation has been about how alcohol is sold, resulting in exorbitant red tape and putting decent businesses into the mincer.
We need more focus on education, and we need to face the harsh truth that our problem with alcohol is not about those who are selling it or those who regulate it, it is about those who abuse it.
• Stephen McGowan is a director in the licensing and gambling team at Lindsays.

Image: McGowan argues that the debate around alcohol should reflect more on the positive contribution the industry makes to Scottish society.